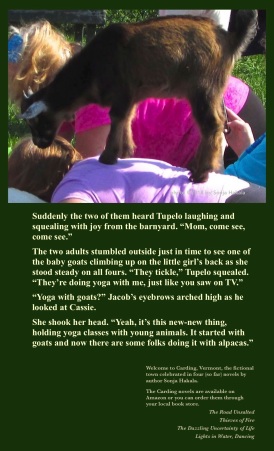 The best-known farm in Carding belongs to Lee and Christine Tennyson. The young couple and their two sons are in Boston this week to attend a family wedding and to see the sights.

They left Jacob Brown in charge while they’re gone—which means that for the next seven days Jacob and the Tennyson’s formidable billy goat, Houdini, will be locking…er…horns.

Cassie Handy, Carding’s local yoga teacher, is helping out. And it looks as though there may be some outdoor yoga classes at the farm while the Tennysons are away.

The question is: What does Houdini think about that? (You can catch up with part one of the Yoga with Goats saga right here.)

Carding, Vermont is the small town that’s the star of my four novels about the place that no one can seem to find on a map. Every Thursday, you can enjoy a Carding Chronicles right here. And you can order the books any time. Details are at the end of today’s Carding Chronicle.

So glad you stopped by.

“So, what do you think? Will Jacob be okay taking care of the farm for a week?” Christine asked her husband as they cleaned up after supper. “I know he’s a Carding boy so he’s familiar with the life. But he’s never actually run a farm before.”

“I know what you mean but things are relatively quiet at the moment,” Lee said as he stacked plates in the cupboard. “He’s helped me fix the fences around here a couple of times, and he’s smart and steady.”

Lee nodded. “Believe me, I’ve thought about that a lot, and I’m betting on the fact that the nannies are on high alert with their kids still so young. I even saw Boo butt him away the other day when he tried to rough house with her little one. He’s not getting any cooperation on the nanny front at the moment.”

They looked at one another for a long moment. “And if anything happens, we’re only a telephone call away,” Lee said. “We can get back from Boston in good time if we have to.”

Jacob was at the farm early the next morning, his favorite backpack stuffed with enough “bang-around” clothes to last the week. He’d noticed a couple of small repairs that needed to be done on the barn, the chicken coop needed to be winterized, and he planned to walk the fences with his toolbox. He was not a man content to sit and watch the sun rise and set.

“There’s plenty of food in the fridge so please help yourself,” Christine said as she strapped her two sons into the back seat of the family van.

“Yeah, Dad made pizza last night and we left you a piece,” Roy, the youngest, said.

“But only one because Roy ate more than his share,” the older boy said.

“Come on, you two. Enough,” Chris said. And then she sighed. “I sometimes think it’s more work to get away than it’s worth.”

Lee jangled a set of keys as he handed them to Jacob. “The tractor and mower keys are on this ring as well as the house key. Don’t feel obligated to do any chores…”

Jacob laughed. “You know that sitting still is not my style.”

He waved at the Tennysons until they were out of sight, and then pocketed the keys. Their dog, Pippin, and their two cats perched expectantly by the back door waiting to be let out, and the hens cooed and clucked contentedly in their pen. Jacob shaded his eyes to scan the highest ridge of the pasture, looking for the goats. The nannies sauntered from one clump of grass to another while the five young ones sparked around their mothers. While he watched, Houdini appeared at the field’s highest point.

A few minutes later, Jacob set off on his fence inspection, Pippin at his heels, her long graceful tail swaying in time with her hips.

It was a perfect autumn day, the kind you’d like to bottle up and enjoy in the middle of winter when the freezing temperatures have you trapped inside. The air was warming from chilly to “a bit cool” to just right as the sun made its trek across the sky.

Jacob moved methodically from post to post, giving each of them an experimental wiggle to make sure it would stand up to the snow, ice and wind, replacing the wire fencing as needed. Just about the time he started thinking about lunch, Houdini showed up as though he was on his own inspection tour, the five little ones massed around his feet, his harem maintaining their watch over the kids from a discreet distance.

Jacob pushed his hat back, never breaking eye contact with the billy. “Look, I know you think that fences are just a challenge but I’m new here so give me a break, okay?”

Houdini shifted his weight and as if on a signal, two of the kids lowered their heads to run straight at the fence.

Wham! The wire structure shuddered at their impact but it held.

Two more of the kids took a run at the fence.

Jacob glared at Houdini who flicked his tail and turned away. The kids followed. The nannies chewed, their eyes flicking from Houdini to the fence and back again.

Jacob shook his head as he gathered up his tools. On one hand, he was glad to know that his fencing held. On the other hand, he couldn’t shake the notion that Houdini was testing him, and Jacob had no idea whether he’d passed or not.

By the time Cassie Handy and her daughter Tupelo arrived for the end-of-day milking, Jacob had the chickens inside and fed, the cats contentedly full of cat food, and the goats filing into the barn.

“So how’d your first day go?” Cassie asked as she helped him guide the nannies into their stalls.

“Just fine,” Jacob said, “except for this one thing with Houdini.”

“Let me guess—he set the kids on you,” Cassie said as she washed her hands in the sink.

“Yeah. I was fixing the fence when he showed up, and four of the little ones ran at it,” Jacob said. “Does he do this sort of thing often?”

Cassie laughed. “Every day. I have to admit he’s a smart old codger. I think he does it just to see if he can catch us off-guard.”

Suddenly the two of them heard Tupelo laughing and squealing with joy from the barnyard. “Mom, come see, come see.”

The two adults stumbled outside just in time to see one of the kids climbing up on the little girl’s back as she steadied herself on all fours. “They tickle,” Tupelo squealed. “They’re doing yoga with me, just like you saw online.”

“Yoga with goats?” Jacob’s eyebrows arched high as he looked at Cassie.

She shook her head. “Yeah, it’s this new-new thing, holding yoga classes with young animals. It started with goats and now there are some folks doing it with alpacas.”

“Is this something you’re planning to try?”

“No, though I have talked to Christine about holding a class on the slope at the edge of the orchard. It faces west and it’s the best place to watch the sun set on the whole farm,” Cassie said.

Jacob shrugged. “If you want to do that, it had better be soon. There aren’t many warm days left in the year.”

“Yeah. Do you think it would be okay if I did it this week? The forecast is clear and sunny all the way through Thursday.”

“Sure. I’ll get over to the field and mow tomorrow.” He nodded his head toward Houdini who was taking his sweet-old-time getting into the barn. “They’ll be able to watch from the pasture so your students should be safe enough.”

Suddenly Tupelo squealed again though not from joy this time. “Mom, the baby goat’s eating my hair!”