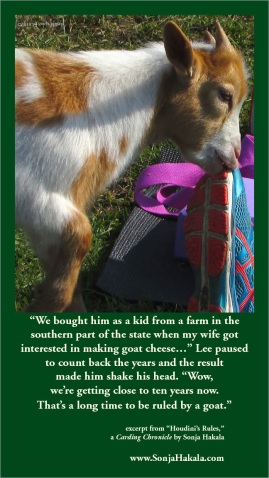 Now folks who farm like the Tennysons of Carding, Vermont rarely get the opportunity to go on vacation because the animals and the gardens don’t take a rest. So they were quite appreciative when their friend Jacob Brown volunteered to watch over the farm so they could go to Boston to attend a wedding and spend a little time in the city.

As Jacob keeps telling himself: “Chickens, goats, a dog and a cat, what could go wrong?”

Carding is a fictional town in Vermont that’s celebrated in four novels (so far). The fourth novel—Lights in Water, Dancing—is now available for your reading pleasure. You can order it from your local independent book store or from Amazon.com. There are links to all of the books at the end of this story.

“Has he always kept a harem?” Jacob Brown asked as he leaned on the fence that surrounded Lee Tennyson’s pasture.

Lee grinned and rubbed his hands together. “Yep. That’s one of Houdini’s rules.”

“Yeah, rules. Houdini doesn’t have too many of them but the ones he does have are absolute,” Lee said.

Jacob settled in. He could spot an oncoming story with the best of them, and he’d always enjoyed Lee’s.

“And the rules are?”

Lee raised his index finger. “One: Thou shalt always have a clutch of no less and no more than three nannies at a time. I think it’s an ego thing because he mostly leaves the two older girls alone.”

“Bippity and Boppity?” Jacob asked. The names of the she-goats in Houdini’s harem were widely known in Carding.

“Yeah. We got them when my oldest boy, Scott, was three and at the time, Cinderella was his favorite movie.” Lee chuckled. “In fact, Scott’s the reason we have three nannies because he kept insisting that we needed a ‘Boo.’ It’s probably a good thing because she’s the only one who likes the old guy.”

“You know, I’ve never asked—how old is Houdini? I can’t remember a time when you didn’t have him,” Jacob said.

“Neither can I, to tell you the truth. We bought him as a kid from a farm in the southern part of the state when my wife got interested in making goat cheese.” Lee paused to count back the years and the result made him shake his head. “Wow, we’re getting close to ten years now. That’s a long time to be controlled by a goat.”

“So what are his other rules?”

Lee raised a second finger. “Don’t interrupt him when he’s eating, especially during winter, and especially when he’s in the barn. He’s quite territorial about his food.”

“Are there any more?”

Lee raised a third finger. “Accept the fact that there’s never been a fence or wall that Houdini can’t conquer. In fact, I think he looks at them as a challenge. That’s another reason I’m glad we have three nannies. Boo will follow Houdini anywhere but the other two girls won’t budge from the pasture. I’ve stood here and watched Bippity butt him when he tries to get her to go on one of his adventures into Carding. And sometimes, the two older females block the younger one so she can’t go either.”

“I take it that he doesn’t like to travel alone,” Jacob said.

“Are you talking about Houdini?” Christine said as she joined them, setting a basket of eggs on the ground.

“Yeah, we were talking about Houdini’s three rules,” Jacob said.

Christine snorted, and Jacob’s eyebrows rose. He’d always considered Christine Tennyson as one of the prettiest and most elegant women he’d ever known, not someone who could snort as well as a horse.

“Did Lee tell you about Houdini’s fourth rule yet?” she asked.

“Oh yeah, Houdini believes he has the right to make any other damn rule he pleases without telling you,” she said.

Lee’s grin got bigger as he tugged his wife’s ponytail. “Chris and Houdini have had a rather explosive relationship at times.”

“Hmph, you tell me how you would feel chasing that fool goat all the way down Meetinghouse Road and then seeing your picture on the front page of the paper. I looked totally crazed,” she said, cocking an eyebrow at Jacob. “It was not my finest moment.”

Lee turned toward his friend. “Aside from Houdini, do you have any other questions about what needs to be done while we’re gone?”

The Tennysons and their children were headed to Boston for a wedding and a family vacation, and Jacob had volunteered to watch over the farm the week they were gone. Chickens, goats, a dog and a cat, what could go wrong?

“I think I’ll be fine,” Jacob said. “You said Cassie Handy is going to take care of milking the nannies, right?”

“Yes, she’s been helping me in the cheese house so she knows what to do, and the harem are used to the way she milks them so she should be fine,” Chris said.

Suddenly, Houdini’s harem appeared at the top of the pasture, followed by their five kids. A few moments later, Houdini appeared.

“Has he got a little strut in his step or is that just my imagination?” Jacob asked. Like everyone who knew the Tennysons’ cantankerous billy, Jacob had a grudging respect for Houdini. The goat had calmed down as he aged but everyone who’d lived in Carding long enough had a tale to tell about the goat’s many escapes from the Tennyson pastures.

Like the time he walked into the Crow Town Bakery and walked out with a loaf of bread, or the time he barged into a game of tag on the elementary school playground. Then there was the time that Reverend Lloyd opened the doors of the Episcopal Church on Easter morning and found Houdini munching the lilies.

And the time that…well, you get the idea.

“As Lee said, Houdini’s got to have an audience and with you here, he’s taking advantage of the opportunity to show off his male prowess,” Chris said.

Her husband swung his head around. “Speaking of male prowess, where are our outstanding kids?”

Chris gave him a poke in the ribs, and then the three of them leaned in together to watch the young goats.

“No matter how many times I watch them, I always get a kick out of the way they cavort,” Jacob said. “Cavort…somehow that word just fits what they do.”

Two of the kids started racing around the pasture, jumping over imaginary obstacles as well as the real jumps that the Tennyson boys had constructed out of old fence posts and tree branches. It didn’t take long for the rest of the little ones to join in while the adults—human as well as goat—watched with benign amusement.

“Just be sure to keep the little ones out of the apple orchard,” Lee said. “The fruit is just this side of ripe, and if they get into it, they’ll eat themselves sick.”

“I promise they’ll be in the barn before the sun is down,” Jacob said. He’d been toying with the idea of farming for a while, and he figured taking care of the Tennyson place for a week would be a good chance to get a little firsthand experience. He knew it was a lot of work but he liked being outdoors and enjoyed hanging out with animals. And, truth be told, he liked the idea of getting out of the heavy construction business owned by his domineering father, Harry.

That alone would be a notable benefit.

At this point in the year, the gardens were empty, the apple orchard would take care of itself until picking time, and the hay was in the barn so Jacob just had to take care of a few chickens, some goats, a dog and a cat.

What could go wrong?