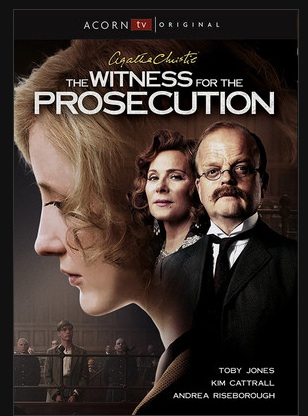 I started reading Agatha Christie mystery novels when I was in my very early teens. If you become a mystery fan, she’s the next logical step after Nancy Drew and company.

Christie became the “queen bee” among British mystery novelists who wrote in the 1920s, 30s and 40s. In addition to Christie, this group included Dorothy Sayers, Josephine Tey, Ngaio Marsh, and Margery Allingham.

I read and enjoyed them all. Among them, they’ve provided the BBC (as well as other production companies) with an almost inexhaustible treasure trove of material, some of it good, some of it not so. But that’s par for the course, right?

I have to say that I find many of the Christie adaptations tiresome, particularly the ones that feature Hercule Poirot and Miss Marple. Like the books, I look at those shows as fall-backs if there’s nothing else to read or watch on a dreary rainy day.

But there are exceptions such as the 2016 BBC production of a short story by Christie called Witness for the Prosecution.

It’s been made before, notably in 1957 with Tyrone Power and Marlene Dietrich. (That was the first film adaptation of a work by Christie, by the way.) But I think this new adaptation with Toby Jones and Andrea Riseborough is far more powerful.

In many ways, it’s a recognizable Christie plot—boy toy kills mistress, wife perjures herself to exonerate him, everyone finds out he’s really guilty once he’s beyond the grasp of the law because of double jeopardy considerations.

Oh, but it’s how they get there that makes this mini-series so fun to watch.

This was adapted from the short story by a writer named Sarah Phelps. Purists argue that she went too far beyond the original material but I found what she did fascinating.

The story takes place between the two world wars, in 1925, and Phelps places the action in this story squarely in the midst of the suffering in England at that time with its persistent food shortages and a people scarred by one war and fearing the next.

It’s the scars that Phelps illuminiated that I found so compelling. Trauma changes one’s psyche, and in this time period, that trauma is shared by everyone. The world is tilted out of anything we might accept as a norm.

It gave me another way to look at our present political situation and what I see in the future.

If you like Witness, I have another Christie adaptation to recommend done by the same people who produced Witness. And Then There Were None is the book that many folks believe was Christie’s masterpiece.

Published in 1939 two weeks before Germany invaded Poland, the book is a haunting allegory for the coming war. The 2015 miniseries stars Aidan Turner (Poldark) and Sam Neil and Charles Dance (you Game of Thrones fans will recognize him).

Ten people are invited to spend a weekend on an island with no other land in view. While there, they are accused of causing the deaths of others, crimes that they have buried in their pasts.

One by one, each of them is murdered until there are none.

Once again, writer Sarah Phelps does an amazing job of peeling back the veils hanging over the psychologies at work among the ten.

They’re well done and intriguing new works based on Christie. The Dame lives on.