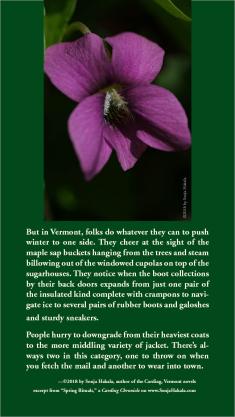 It’s April in Vermont, and spring starts and stops as it struggles to vanquish winter.

Everyone in Carding has their way of coping.

There’s a weariness to the end of winter as it slides into spring. People are tired of boots. Tired of wearing heavy coats and mittens. Tired of shoveling.

So when they sense the advent of spring, people try their best to hurry it along.

When you think about it, closing the door on winter and opening it to spring is an act with distinct markers. You just know when it’s happened.

By contrast, when you round the calendar’s corner from spring into summer, there isn’t a single “event” that signals the start of the warmest months. It’s just less cold, the flowers are more abundant, and the scent of barbecue is in the air.

And moving from summer into autumn is a slow parade of subtle changes—the weakening of chlorophyll in the leaves, fewer minutes of sunlight that gradually mount up to six o’clock sunsets, and then the sight of those first red leaves.

But spring is different and in Vermont, folks do whatever they can to push winter to one side. They cheer at the sight of the maple sap buckets hanging from the trees and steam billowing out of the windowed cupolas on top of the sugarhouses. They notice when the boot collections by the back door expand from just one pair of the insulated kind with crampons  to navigate ice to a variety of rubber boots, galoshes and sturdy sneakers.

People hurry to downgrade from their heaviest coats to the more middling variety of jacket. There’s always two in this category, one to throw on when you fetch the mail and another to wear into town.

The first ventures into the yard are to gather the fallen limbs and branches knocked down by high winds and ice. This is a great time for children of all ages to play with the water braiding its way down every available slope as the frost leaves the ground. (“Sailing away on a muddy day designed for play—tra la!”)

By this time in April, barring some strange weather occurrence, those lunges toward spring are behind us now, and the final push is at hand.

And that final push is raking snow.

Let me explain to the uninitiated. Vermont is a land of folds. Our ground is always busy going up or going down, and this unique feature provides an abundance of nooks and crannies  where shadows can hide.

Those shadows keep out the sun and keep in the snow far into April. This happens on the backside of trees on a sloped lawn, at the bottom of hills that face north, under rocky overhangs, and in the places where the winter’s army of snow plows, snowblowers, and shovels made deep piles of the white stuff.

Except by this time, it’s not really snow at all but ice crystals, and everyone is sick of looking at it.

This snow raking always amused Ruth Goodwin on her rounds for the post office. Agnes Findley was usually the first snow raker of the season. Armed with an especially lethal metal rake, Agnes attacked the pile of white on the northwest corner of the house she shared with her partner Charlie Cooper, pulling it into their driveway where it could melt.

Charlie, on the other hand, used a small hay fork on the last bits hiding behind the stone wall that marked their vegetable garden.

Up on Mount Merino, the grounds crew used a grader to break the last ice on the slopes into small pieces that disappeared in the now warming afternoons.

Everywhere she drove in April, Ruth saw people who lived on her mail route digging, gouging, raking, and sometimes even stomping the last ice of winter into oblivion.

And then as she turned toward home, taking the route that snaked by the marshy area at the east end of Half Moon Lake and the small field glowing purple with violets, Ruth slowed down, the windows of her Jeep wide open. When she reached a wide spot in the road, she pulled over, nose to nose with Gideon Brown’s truck.

They nodded at one another then leaned against their vehicles, their arms crossed over their bodies as they stood in silent vigil listening to the first glowing notes of the spring peepers.

It had come again, and for the moment, all was right with the world. 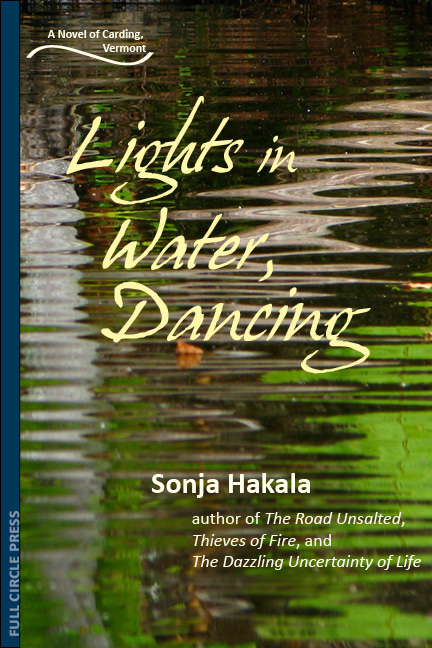