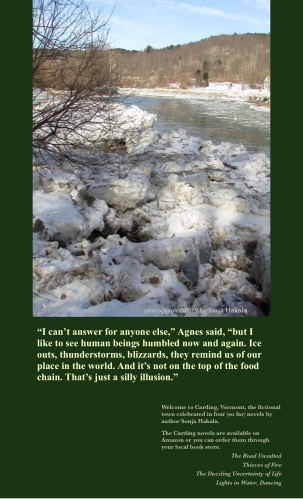 My family has lived on a river in Vermont for 25 years. It’s always interesting, always changing, different this afternoon than it was this morning.

Over the course of a winter, ice can form, melt, float away, and re-form several times. But generally, by this time of year, it’s pretty well settled, coagulated in thick slabs along the banks, sometimes all the way across.

It is very rare indeed that the ice just melts, not on a river. Most often, the water rises because of the snow melt or we get a sizable rainstorm. The ice breaks up and then, on some invisible signal, it decides to flow downstream all at the same time.

It’s ice out time on the Corvus River as it flows through Carding, Vermont and you’re invited to watch.

Agnes Findley sighed as she joined the stop-and-go traffic heading out of Montpelier, Vermont’s capital city. You can’t tell what color car anyone is driving at this time of year because they’re all coated with the same gray dirt. And there’s no such thing as a good road either because they all buck and weave with frost heaves like the ocean in a heavy swell. One second, your car’s up in the air. The next second, it’s bottoming out in a dip.

Agnes sat through two red lights, her fingers drumming a slow-motion tattoo on her steering wheel, silently cursing the traffic. Then she laughed at herself, remembering the eternal car crawls of her former commute in Boston. Back then, a ten-mile journey could and did take an hour or more. In Vermont, her commute from Montpelier consisted of two turns, two sets of lights, and then a nonstop ride all the way home. The forty-seven miles took less than forty-five minutes.

“Piece of cake,” she murmured.

A brown UPS truck turned south on Route 14 just ahead of Agnes, and she soon found herself fascinated by the sharp sway of its cargo box as it negotiated the curls and dips of the frost-heaved road. Charlie’s right, she thought, the roads twist and turn like strips of fried bacon this time of year. I wonder how they keep the boxes on the shelves inside those trucks.

She slowed to negotiate a tight S-curve and glanced to the west where the sun was making itself comfortable for the coming night.

“Come on,” she pleaded. “Just a few more minutes of light. You can do it.”

As the light shifted from light gray to something darker, Agnes geared down again for the turn to Carding, keeping a sharp lookout for the tire-eating pothole at the corner of the Route 37 bridge.

What was it about that particular spot in the road that made it so fragile? Every spring, the town road crew patched, mended, and repaired the same tire-eating spot to no avail. One year, they even hired an engineering firm to figure out how to reconfigure that whole stretch of road in order to overcome the infamous pothole.

But the chasm reappeared every year as the days grew longer.

Her pulse rose a notch when she spotted a knot of people coagulated in the small park-and-ride overlooking the river.

“Agnes,” someone called as she got out of her car. “You’re just in time.”

She hustled to claim a spot at the guardrails that kept the unwary and careless from sliding off the road into the Corvus River. The love-of-her-life, Charlie Cooper, reached out to draw her near.

“What’s the report from upstream?” she asked as she turned up her coat’s collar. The air always held a special chill by the river.

“The ice has just started to move in Royalton,” old Henry Wood said, his phone pressed to his ear. “My cousin Nellie says she can hear the big chunks knocking against one another.”

He looked down at the Corvus where rivulets of pewter-colored water flowed over the whiter ice. He shook his head. “It hasn’t been that cold this year so my guess is that the ice is no more than a few inches thick. Probably won’t be much of a runoff.”

The sun gave the clutch of Carding-ites a final salute as it slid behind the hills to the west. Everyone glanced in its direction in silent salutation.

“Heh, think about it. Three months from now, we’ll be complaining about the heat,” Henry said, and the sun watchers laughed.

Just then, a low roar in the distance hushed the crowd. Every head turned to look upstream toward a bend in the river. The earth rumbled beneath their feet. The crowd tensed.

Wil Bennett leaned as far over the guard rails as he could, pointing his video camera upstream. The rumble moved up a decibel level. The dusk thickened. All eyes strained to see in the gloom.

Ice shards careened around the bend. The water level rose rapidly, covering the pastoral landscape of the winter river in the span of just a few heartbeats. The roaring runoff jumped the bank at a low spot in the land just before the park-and-ride, pushing car-sized chunks close to the road.

Agnes felt the guard rail shudder in her hands. Henry was right. The snow-topped chunks of ice were only six to eight inches thick but that did not diminish the river’s display of power.

“It’s hitting the falls,” Wil yelled, and they all heard the crash as the frozen slurry plummeted thirty feet into Half Moon Lake.

At that point, the thrill quickly turned into anxiety and everyone drew back at the same time, suddenly aware of how flimsy metal guardrails were in the face of such fury.

“I’ve lived here all my life,” Charlie yelled over the roar, “and this never fails to amaze me. Why is that?”

“I can’t answer for anyone else,” Agnes said, “but I like to see human beings humbled now and again. Ice outs, thunderstorms, blizzards, they remind us of our place in the world. And it’s not on the top of the food chain. That’s just a silly illusion.”

Charlie chuckled. “My, you are feeling philosophical today, my dear. How did things go in Montpelier?”

Agnes sighed. She volunteered her legal skills for a consortium of environmental nonprofits, lobbying on their behalf at the statehouse. She squeezed his hand. “Not as well as I hoped but not as bad as I feared. I’m afraid it was all very human. That’s another reason why I enjoy this.”

She gestured at the rampaging river. “It reminds me why it’s important to keep on fighting.”