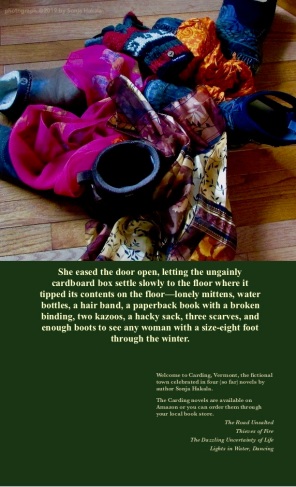 Everybody’s got one—a junk drawer or a junk closet or a junk cabinet.

And periodically, you just need to take the time to sift through them and try to sort things out.

Well, today’s the day at the Carding Academy of Traditional Arts because Edie Wolfe can’t open the closet in her office any more.

No matter how many times she cleaned out the closet in her office, Edie Wolfe always approached its door with caution.

“We ought to call this the Academy’s catch-all,” she told her dog, Nearly. He tilted his large ears forward with apprehension, remembering the time his person opened that door and he’d been beaned by a basket full of mittens.

Being a smallish dog and feeling no need for outsized displays of bravery, Nearly retreated to a promising patch of sunshine on the braided rug by the bow window that looked out into the woods behind the Carding Academy of Traditional Arts.

“Hmph, smart boy,” Edie said. Then, grasping the closet door handle firmly, she stood to one side and opened it just a few inches.

In the closet, things adjusted themselves with faint but ominous sounds. Nearly considered moving out into the hallway but with so many students in the building, the odds of being stepped on were higher than he liked.

Edie peered inside, and then sighed. “It’s the lost and found,” she said. “I wish someone would figure out a better place to put that box.”

She eased the door open, letting the ungainly cardboard box settle slowly to the floor where it tipped its contents on the floor—lonely mittens, water bottles, a hair band, a paperback book with a broken binding, two kazoos, a hacky sack, three scarves, and enough boots to see any woman with a size-eight foot through the winter.

“What the…?” Edie grunted as she paired up the sundry footwear—knee-high boots with a set of blue ice-grippers, heavy over-the-ankle boots for serious tramping in the snow, fleece-lined mocs for short goings-from-here-to-there, and a pair of rubberized slides for mud season.

“Well, someone must be running around barefoot,” she said to Nearly. He raised his head but didn’t bother to move from his sun patch.

“Hi Edie, I was just heading to the post office.” Agnes Findley craned her head around the office door. “Do you need…oh, what have we here? Looks like an L.L. Bean delivery.”

“Yeah, one would think. Look, they’re all the same size,” Edie said.

“No. If they did, I’d give them a new home.” Edie smiled at her friend as she stood up. “Where do you suppose the souls of the stuff in a lost and found end up if no one claims them?”

“Probably with the lost luggage at airports. Oh, there’s my mitten.” Agnes grabbed a blue hand warmer from the pile. “I use these for shoveling because they’re lined. I was really upset when I lost one.”

Edie picked up an orange scarf. “Need an accessory to go with your reunited mittens?” she asked. “And why does this box always ends up in my closet?”

“Because it was in mine, and I didn’t have space for it any more.” Agnes looked sheepish. “Sorry.”

“Hmph, well it’s time to bring this horde out of the dark and into the light,” Edie said as she tossed everything back into the box. “A little artful display in the lobby and a deadline for claiming this stuff ought to do it.”

“I’ve got some  twinkly white lights in my office, and there’s that step display in the copy room,” Agnes said as she helped Edie tug the box into the Academy’s lobby. “Let’s give this lot a big send-off.”

An hour later, an artful display of the lost-and-found articles took center stage in the lobby of the Carding Academy of Traditional Arts. The water bottles were the first things to be reclaimed. Then the moccasins were gone and a scarf was scooped up with a loud “oooh, I wondered what happened to that.”

Edie, who was also the Academy’s executive director, bustled about her day, answering emails, directing traffic, writing up the class descriptions for the coming winter schedule, and taking Nearly out for a couple of walks.

So she didn’t get back into the lobby until the sun had almost disappeared behind Mount Merino.

“Well, let’s see how we did, shall we?” she said to her dog as they ambled down the hallway. That’s when she spotted the empty display—no mittens, no scarves, and all the shoes and boots gone.

“Hey, that was a success,” Agnes said as she came up behind Edie. But then her face drooped, and she pointed to a plastic tote that stood to one side. Someone had taped a handwritten sign on its side—New Lost and Found.

It held a pair of flip-flops, a plastic watering can, two pink bandanas, some silk sunflowers, a leather-bound notebook, and a gilded pen. The two women sighed as one.

Agnes shook her head. “Nope, my closet’s full of brochures and catalogs. It’ll have to be your closet.”

“Well, at least it’s a little lighter,” Edie said as they schlepped the tote back to her office. “I guess that’s an improvement, eh?”

Remember, you can visit Carding any time by reading one of my four Carding novels, The Road Unsalted, Thieves of Fire, The Dazzling Uncertainty of Life, or Lights in Water, Dancing.