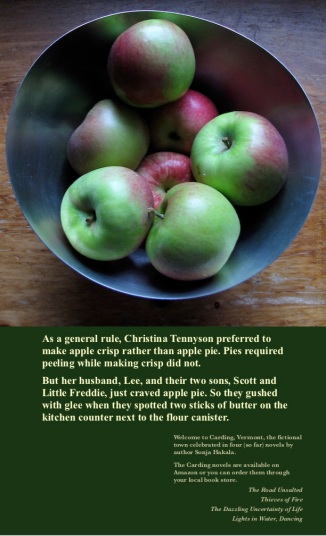 But this pie isn’t for their family though there might be a slice or two coming their way.

Won’t you join us for Pie Night at the local music school? Freddie would love to see you there.

As a general rule, Christina Tennyson preferred to make apple crisp rather than apple pie. Pies required peeling while making crisp did not.

But her husband, Lee, and their two sons, Scott and Little Freddie, just craved apple pie. So they gushed with glee when they spotted two sticks of butter on the kitchen counter next to the flour canister.

In spite of the fact that she’d given birth to both of them, Chris experienced daily amazement at how different her two sons were from one another. Scott was a Tennyson through and through, tall, slender to the point of lanky, brown-eyed, and already graceful in the way of the men in her husband’s family. She could already detect the sculptural qualities of his face emerging from the soft roundness of boyhood.

Here and there, around the eyes mostly, Chris detected traces of her genetic contribution to Scott but he was truly the image of his Dad.

Like Lee, Scott would never be handsome or cute in the traditional senses of those overused words. But thoughtful women would be drawn to his quiet, respectful manner. As his mother, Chris was glad of that. She had seen too many childhoods damaged when “cute” kids fell victim to the fickleness of high school popularity.

She figured her oldest son would become more handsome with age, just like Lee.

Little Freddie, on the other hand, was a very different sort of child. Instead of being tall and lanky like his older brother, Freddie’s build resembled that of a football linebacker—broad across the chest—just like Chris’s father. But that’s where any family comparisons fell to the wayside.

Freddie was shorter than his brother had been at the same age and he held his arms at his sides as if ready to ram his way through life. He was dark-haired and the brown of his eyes was so deep, it was often difficult to see his pupils.

The old-timers in Carding nodded sagely when they saw Freddie around town. “Throw back to his great-grandmother Elayna, that’s what he is,” they told one another.

When she first started dating Lee, Chris heard all sorts of elvish-like tales associated with the first Tennysons in Carding, especially the family matriarch, Elayna. According to town legend, she charmed the original Christmas trees grown on the farm and to this day, people claim they work tiny miracles on the people of Carding.

Elayna was dark-haired and eyed, just like Freddie, which is why so many Carding-ites believed she had come back to life in the four-year old.

Back in the Tennyson kitchen, Freddie celebrated the imminent arrival of pie by dancing with his hands above his head, accentuating his words with vigorous hops from one foot to the other.

Chris smiled as she looked down at her youngest child. “But this isn’t for you, remember? It’s for your concert tomorrow.”

Freddie stopped so short, his slippered feet slid out from under him, and he sat down on the kitchen floor with an audible “oooffff.” He swung his head from his mother to his father as Lee struggled to hold in his laughter. “Concert?” the little boy asked. “What concert?”

“The one with the violins, remember?” Scott informed him in that stoic big-brother way he’d recently adopted with Freddie. He loved his little brother but Scott felt that Freddie needed more discipline in his life. The kid reminded him of the Tasmanian devil that showed up in the cartoons his mother let him watch once in a while. Sometimes being Freddie Tennyson’s brother was too much to bear.

Freddie leaped to his feet. “Su-zu-ki,” he yelled before he powered out of the room.

Lee and Chris shook their heads with a shared smile. Of all Freddie’s many enthusiasms, his passion for music had become a constant in his young life. As soon as he could totter on his feet, he had danced to any tune that floated through the air at the farm. From Bach to Eric Clapton to “Farmer in the Dell” to the Sesame Street theme, Freddie danced to it all, head bobbing, fingers waving, and feet stomping.

Scott thought he looked like an out-of-control Teddy bear while his parents thought Freddie too cute for words.

In addition to his dancing, Freddie experimented with the sounds of things. He’d rat-a-tat-tat on a table then compare that sound to the twanging of a rubber band. He created a drum kit out of a motley collection of buckets and castoff pails, using a pair of wooden spoons to keep the beat.

Lee bought him a kazoo and Chris bought him a child-sized kalimba, both of which Freddie added to his repertoire with enthusiasm.

“Should we enroll him in music classes?” Lee had asked his wife while they watched Freddie bang away in their front yard.

And they did. If you recognize Freddie’s reference to “su-su-ki,” you’ll know that they found an outlet for his musical enthusiasms.

The search for Suzuki started one day at a local flea market when the little boy spotted a toy violin in a box of castoffs.

“Have you ever thought about getting him into a Suzuki program?” the flea market dealer asked as he accepted Lee’s dollar for the violin. “My granddaughter’s been taking lessons in the program since she was about his age, and she just loves it. She’s seven now, and plays the flute. She’s amazing.”

The Suzuki method of teaching music is unique. It was developed by Japanese violinist Shinichi Suzuki who wanted to bring beauty into the lives of the children who’d lived through the devastation of World War II. This magical teacher believed that all children could learn to play music in the same way they acquire language, not through rote practice but through listening with their hearts. His methods are now used internationally.

After poking around a bit, Lee and Chris found a Suzuki music school and immediatey enrolled Freddie. Tonight, along with his fellow students (about a dozen three- and four-year olds) they are giving their first performance together, plucking the strings of a wide variety of homemade “violins” whenever the word “pop” comes around in the song “Pop Goes the Weasel.”

The pies, courtesy of parents and grandparents, will be sold by the slice as a fundraiser.

Since it is so close to Halloween, the kids have planned something special for their audience. Instead of plucking the strings of their violins on the last “pop,” they’re going to shout “boo!”

Freddie is very excited about this so please don’t tell anyone. He wants it to be a surprise.