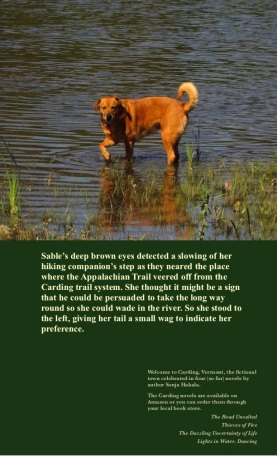 Tourists flock to Vermont this time of year. Buses roar along our small roads and all of the hotels, motels, inns and campsites are booked.

And it’s all for the leaves.

Generally speaking, Carding, Vermont goes about its business without too much crowding. But when autumn peaks, so does the number of people in town. And not everyone’s happy about that.

Andy Cooper has long made a habit of celebrating the autumn equinox by turning his kitchen calendar toward the wall. Of all the tourist seasons that ebbed and flowed over Vermont—skiing, fishing, hiking, hunting, and just plain old summer—the only one he dreaded was the monthlong peak-of-foliage season.

“Leaf peepers,” he’d snort as soon as his eyes opened in the morning. His dog Sable made eyebrow tents at him, gauging her response to his words by the vehemence of his voice. This morning’s opening outburst didn’t sound too bad so she lifted her head and let the luxurious curl of her tail thump against her bed.

Andy grunted as he leaned over to massage one of her ears. “Just let me get a little breakfast, and we’ll be on our way,” he said.

Now you’d think that Andy, in his capacity as the owner of the Cooper General Store and Emporium, would welcome the annual flood of “people from away” with open arms. And he probably did when he was younger.

But it seemed to him that tourists were more aggressive nowadays. Between the hustling tour guides and the Chamber of Commerce and the hype-hype-hype of the changing of the leaves by the inane exploding heads on television news shows, the tourist expectations of finding joy in “Vermont Land” had become unrealistic.

The truth was, Andy had grown weary of explaining that he was not personally responsible for the reds, yellows, and oranges or any lack thereof. And the next person who complained about the dearth of pre-carved pumpkins in his store was going to get a good solid whack upside the head.

These thoughts made him growl into his granola, causing Sable to pause in her morning kibble devotions to see what would happen next. But then Andy heaved a big sigh, and seemed to settle down. Sable hoped this foretold a longer walk than usual to start their day.

Breakfast over, man and dog quietly padded out the back door, and headed toward the path that connected them to the town’s trail system, a skein of byways that ambled over the hilly terrain on the south side of Half Moon Lake. As soon as they were out of hearing distance of the store, Andy muttered “You go, girl” and the dog sped off.

Edie’s right, he told himself, I am becoming a grump about the tourists. And it’s ruining fall for me. Maybe it is time I let my sons take over the store.

He grinned as he watched Sable dive into the underbrush, and then emerge decorated with chains of tiny green burrs down the middle of her back. He clucked, and she obediently stood still while Andy plucked the worst of the mess from her fur. Then she sped off again after a quick parting pat on her backside.

As much as Sable loved hiking around Carding, she never lost sight of her real job—keeping track of Andy. So she stopped at every fork in the trail to wait for him. When they spotted one another, Andy would point to the left or right, and then she’d hightail it down the appropriate path.

They each considered this a good relationship. Andy was left to his musings while Sable was free to keep the local squirrel population on its toes.

Should I step back and let my sons take over the store, Andy asked himself again. Barry and his wife Joan would probably be up for it. They’d been running the most popular coffee shop in Montpelier for six years now, and they were good at it. And they’d been making noises about moving on because the building that housed The Daily Grind would never be theirs.

From what Andy could tell, Barry was a good front man. He had an eye for trends, introducing new flavors and gizmos long before any other coffee shop in the city. Joan, on the other hand, had become a number-cruncher extraordinaire, a far cry from the young woman who once had movie aspirations.

They’d be a good fit for the Coop, Andy thought, and the timing was probably right.

But then there was Jack, the younger brother with a life that just never seemed to gel. He’d been only three months away from his high school graduation when their mother, Andy’s beautiful Sophie, had died of cancer. Blinded by his own grief, Andy didn’t realize how badly the boy had been hit until it was too late.

In spite of everything, Jack had insisted on going off to college that fall. After all, the University of Vermont wasn’t that far away from home. So Andy let him go even though his instinct was to keep the boy in Carding for another year.

Shoulda listened to my gut, he told himself for the millionth time. That boy was adrift and I knew it. He wondered how Jack would react if he asked Barry and Joan to take over the store. Would he want to come home and work with his brother?

Would Barry want that? What was fair?

Sable’s deep brown eyes detected a slowing of her hiking companion’s step as they neared the place where the Appalachian Trail veered off from the Carding trail system. She thought it might be a sign that he could be persuaded to take the long way round so she could wade in the river. So she stood to the left, giving her tail a small wag to indicate her preference.

Andy stopped. It was tempting. Wandering through the woods on a fine autumn morning with a great dog. It didn’t get much better than that.

But he felt the store pulling on him. Yeah, his staff was fine without him for a while. But it was the busiest time of the year, and he really should be there.

He sighed, and let his hand trail over Sable’s soft fur. “I think we’d better go back, girl,” he said.

So they turned right to take the path that led back to the Coop, Andy’s head down, and his hands jammed into the pockets of his jeans. Sable, her initial burst of morning energy now quelled, trotted at his side.

All was quiet until the duo hit the edge of the store’s parking lot when Andy’s thoughts were drowned out by the low rumble of an empty tour bus at idle.

“Why don’t you turn off that thing while you’re waiting?” Andy growled at the driver lounging against a nearby tree.

The guy squinched up his face. “It’s only a short stay,” he said. “Thirty minutes. They like to get in quick and get out quick. We keep a tight schedule.”

Andy growled again, and was about to head for the store’s back door when he heard a multitude of camera clicks behind him. He spun around just in time to see a small forest of tourists hold up their phones to take more pictures of him.

“What the hell do you think you’re doing?” he asked.

A smiling man on the far edge of the crowd beamed at Andy. Sable ducked behind his legs as the smiler’s hand swept the scene. “Notice how rustic,” he announced while the tourist heads bobbed. “So Vermont.”

“What the…?” Andy scrabbled in his pocket then raised his phone to his face.

“I’m gonna put these in my scrapbook,” he said, stepping closer. Some of the tourists turned to their guide, asking questions in a language Andy didn’t understand. The tour guide’s smile looked a little less certain.

The tour guide raised his hands to guide his flock toward the safety of the bus while Andy continued to click. As soon as they were out of sight, he tucked his phone away, and headed back toward the path.