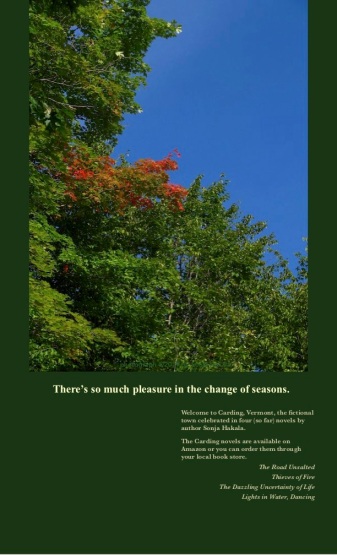 The slide of calendar pages coincides with the roar of yellow school buses this week as folks in Carding start to walk a bit faster.

Even though the temperatures are still balmy during the day, you definitely need a sweater or light jacket in the evening. There’s a reason for the wide variety of outerwear (as the retailers like to call it) in everyone’s closet.

But before they fast-forward through fall, some folks are pausing at Edie Wolfe’s house to celebrate the change of seasons.

Let’s join them, shall we?

Ruth Goodwin pulled back the curtain on Edie’s front window to peer across Carding green.

“Are you sure they’ll come?” she asked again.

Edie smiled as she fished a set of heavy wine glasses from the deepest regions of the most seldom-used cabinet in her kitchen. Though not to her more simple taste, Edie treasured the gaudy stemware. They’d belonged to her grandmother, Kitty Wolfe.

Edie always thought of her grandmother as a no-nonsense kind of lady. Oh, Kitty baked her share of cookies, hosted Thanksgiving dinners, and tended cuts and bruises with solicitous care. But Kitty preferred things in her life to be rather stripped down and practical.

So why in the world did she own a dozen fluted glasses in swirls of deep autumn gold with overripe eggplant-colored stems? They were so unlike her.

“Do you know if anyone has everything done yet?” Ruth called from the living room while Edie rinsed the drinking vessels under the tap and wiped them dry.

“I think everyone has made a start,” she said. “I saw Lydie in the Coop yesterday, and she’s cut down the small garden by her front door.”

“What about Agnes? There was a huge pile of wood in their front yard when I drove by yesterday afternoon,” Ruth said.

Edie craned her head around the doorway so she could see her best friend. Of the two of them, Ruth had always worried more about…well…about everything, really. Agnes often teased her about being the lady with the permanently puckered brow.

Ruth caught the glance, and laughed at herself. “I know, I know,” she said. “But at my age, I’m scarcely going to change, am I?”

“Do you want to put your rolls out on the table?” Edie suggested.

Ruth grinned. “So that I’ll stop fretting by the front window?” she said. “Sure.”

While some of the younger families in Carding relied on oil-burning furnaces for winter heat and the shelves of the Coop for fresh veggies, the majority of Carding-ites loved the deep warmth of their wood stoves and smothering their pancakes in applesauce they’d canned themselves.

Participation in these rituals means stacking wood, gardening, and picking fruit at local farms. These activities inevitably lead to what Edie calls “the delicate dance of autumn.”

“You have to hit it just right,” her friend Andy Cooper advises first-timers to the traditions. “If you start stacking wood too early in September, you’ll die of the heat while you’re doing it. It’s definitely a chore you want to save for a cool day. And let your gardens go as long as you can to get every last bit of the harvest.”

Of course, the trouble with this timing business is hitting the sweet spot of daytime temperatures cool enough to stack wood but not so cold that cutting back a garden means frozen fingers.

Locals figure that you can ignore the first swirl of frozen precipitation because “it doesn’t stick.” So their lawn furniture stays out because the wood and gardens take precedence. In general, this means that Halloween is a good target for “getting it all done.”

But one year, the first snow came on October 15th, and it was deep, about ten inches. And  it stayed cold.

“Froze my picnic table to the ground,” Charlie Cooper said. “And I still had half my wood to stack. That was a miserable fall.”

But none of that matters tonight. Now is the time for Edie’s annual celebration with her friends, the moment when they gear up for the race to winter readiness.

Hence the gaudy glasses, the ones that looked like harvest to Edie’s eye and, she suspected, to her grandmother’s as well. They’d fill and refill them with wine or sherry over their traditional supper of roasted chicken, squash from Andy’s garden, potatoes from Lydie’s, onion dressing courtesy of Agnes’s dirt digging, and applesauce made from the first fruit from the trees in Edie’s backyard.

She held one of the glasses up to the fading September light, admiring its rich color. There’s so much pleasure in the change of seasons.