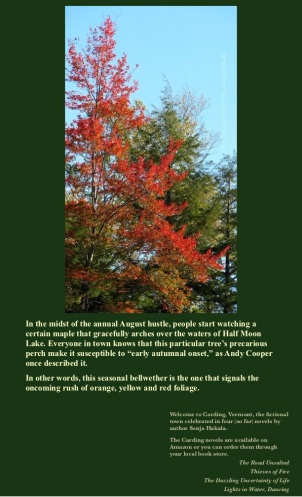 School starts soon and even though the daytime temperatures are still quite warm, the hours of daylight are getting shorter.

So the thoughts of folks who live in Carding, Vermont are turning to the next season on the calendar.

There are signs everywhere, if you know where to look, of the autumn to come.

Let’s check in on the waning of August in Carding, shall we?

Even though the days have been growing steadily shorter since June 22 (the day after the summer solstice), no one seemed to notice until the calendar reached August. Suddenly, the lazing air of July has taken on a new urgency.

The town beach is crowded with families during the day and teenagers trying out their night moves in the evening. The lines at the Coop’s ice cream window are longer, and there were more lawn chairs parked gathered on the green for the summer’s last free concert than there have been all season.

In the midst of the annual August hustle, people start watching a certain maple that gracefully arches over the waters of Half Moon Lake. Everyone in town knows that this particular tree’s precarious perch make it susceptible to “early autumnal onset,” as Andy Cooper once described it.

In other words, this seasonal bellwether is the one that signals the oncoming rush of orange, yellow and red foliage.

Like so many other things in Carding, a friendly local competition has sprung up to see who spots the change first. The dynamic duo that does the weather on Dirt Road Radio started promoting it this year so interest has spiked.

The winner has to take a picture with a date stamp to prove the sighting. In return, she or he gets bragging rights, a T-shirt from the Coop, and a day’s ration of warm muffins from the Crow Town Bakery.

So who do you think will take the prize this year? Here are some of your choices.

Ruth Goodwin, in her position as the town’s splendiferous mail carrier, is usually the first one to notice the oncoming yellow because she drives Beach Road, which is the easiest access point to the “first tree,” every day.

But Charlie Cooper, semi-retired lawyer and social activist, has been regularly commuting to the state capital, Montpelier, since taking on a consulting job last spring. There’s a gap in the trees just before he turns onto Route 37 where he can see the tree. So he thinks he’s in a good position to get the scoop on Ruth.

Earlier this month, Wil Bennett vowed to paddle his kayak on the lake every morning in August, and he always circles Half Moon so some of the early betting is on him.

His younger sister Faye, however, is not to be outdone. Much to her parents’ amazement, she has taken up sunrise running on the beach. She swears it has nothing to do with the fact that her boyfriend, Dave Muzzy, is also sprinting there.

But I’ll let you be the judge of that.

Then, of course, there’s the ever-reliable angler, Bruce Elliott, who always stops to cast a hook in the water on his way to and from work as well as Mr. Yancy, the refugee from the tech sector who’s passionate about birds.

You can eliminate all of the people who own condos and houses on the golf course on Mount Merino. To them, Half Moon Lake, seen in the distance from the fifth, sixth, and seventh holes, is nothing more than an anonymous sparkle in the distant landscape. Years ago, their landowners association tried to purchase lakeside property but couldn’t scare up any willing sellers so they mostly ignore the lake in favor of their new pool.

It’s just as well because the folks who live in Carding proper have never granted any Mount Merino resident the status of “local.”

Tree watching has been the subject of friendly banter and passing-the-time conversation everywhere that town folk rub shoulders—the bank, the bakery, the library, town hall, and the Coop.

Andy’s going to post the winning picture on the community bulletin board at the front of his store. Afterwards, people will go back to filling the remainder of their summer days with a frenetic round of barbecues and biking dates while digging out a fleece vest or two for the cooling evening air.

And that rumbling you hear in the distance are the school buses revving up for the start of another year.

Aah yes, change is in the air.

Remember, you can visit Carding any time by reading one of my four Carding novels, The Road Unsalted, Thieves of Fire, The Dazzling Uncertainty of Life, or Lights in Water, Dancing.