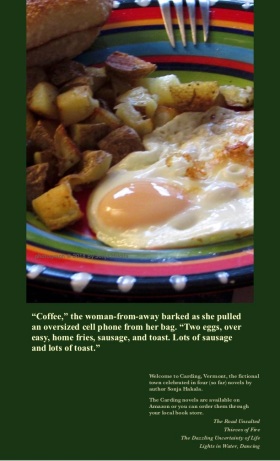 I’m sure you’ve had an eye-rolling moment or two in your life, those times when your eyeballs drift upward because you just can’t believe how obtuse another person can be.

Over at the Crow Town Bakery, Stephen Bennett has become something of an expert on he calls “invisible eye-rolling.” But his ability to do that is being tested today.

Let’s open the door to the bakery and listen in, shall we?

Anyone who’s ever had a job working with the public develops some variation of the expression, “It takes all kinds.” This expression is often accompanied by an eye roll toward the heavens. This is the ritual of expiation for the frustration felt by legions of waitresses, store clerks, librarians, cashiers, police, and anyone who’s ever served on a local government board.

Over at the Crow Town Bakery, owners Stephen and Diana Bennett have learned to carefully mask their exasperation because, after all, every customer has the potential to spread the word—good or bad—about their coffee, crullers, and muffins. They are especially careful to do this during ski season when the slopes of Mount Merino are busy and there are all sorts of people-from-away in town.

But local denizens of Carding’s favorite breakfast spot have become adept at interpreting the signs of Bennett exasperation, using them to hone in on the choicer examples of humankind at less than its best. If Stephen’s cooking at the griddle during an it-takes-all-kinds moment, everyone knows he holds his spatula in an upright position as if he’s conducting an orchestra.

If his wife Diana is out front—she spends most of her days baking in the kitchen out back—she slowly wipes her hands on a clean towel as if fascinated by the removal of moisture from her skin all the while absorbing “the silliness,” as she calls it.

The snow pack up in the mountains of Vermont was heavy this year and with the temperatures habitually below freezing, the ski resorts were able to lay down a good base on the slopes all season long. This adds up to good spring skiing, a financial bonus that makes the owners of Mount Merino, and every other ski resort, exultant.

Which is why there are still folks “from away” wandering into the Crow Town Bakery from time to time.

On this particular morning, Stephen was busy at the grill, tending to pancakes and scrambled eggs with equal ease, when a woman of mature size opened the front door and stood in the opening so that she could examine the bakery’s interior.

Stephen waited for a beat or two but then said: “Would you mind closing the door?”

When the woman gave him a mini-glare, Stephen’s body tightened in anticipation of a wordy altercation. What is it about “we’re paying for the heat and you’re letting it out” that some people don’t understand?

Just then, Ruth Goodwin came up behind the woman, sized her up, and rumbled “Excuse me” with just enough vocal pressure to push the woman-of-mature-size over the doorstep.

She jangled softly as she approached the counter, the bangles looped about her wrists glinting in the sunlight. Over her shoulder, Ruth raised her eyebrows in Stephen’s direction. He stayed expressionless.

“Can I sit here?” the woman asked, indicating the stools near the end of the counter. Stephen pegged her accent as North Shore-Boston sprinkled with dust from New Jersey.

“Sure.” He laid a menu, napkin and silverware on the counter at the place she’d indicated, taking care not to notice (as she perched herself on a stool) that she left no space for anyone else to sit on either side.

“Coffee,” she barked as she pulled an oversized cell phone from her bag. “Two eggs, over easy, home fries, sausage, and toast. Lots of sausage and lots of toast.”

Her voice carried to the far reaches of the bakery. Ruth Goodwin, who had settled herself at a table with Stephen’s mother-in-law, Edie Wolfe, raised her head with interest. Ruth collected the oddments of people, weaving the details of facial expression and speech into stories she’d tell later at the post office, her quilt guild meetings, and in the aisles of Cooper’s General Store.

She watched carefully as Stephen turned back to his griddle. When he raised his spatula like a baton, Ruth elbowed Edie and nodded in the direction of the counter.

The woman of mature size jabbed her finger at her phone, her cheeks squeezed together in frustration. Then she turned it to her ear, listened for a moment, sighed loudly, and then repeated the ritual. Again and again and again.

Stephen slid her breakfast along the counter until it came to rest near her elbow. Hilary Talbot, everyone’s favorite waitress, refilled the woman’s cup with coffee before setting off on her rounds among the tables.

Stephen turned back to the griddle, his spatula upraised.

The woman finally stopped torturing her phone, settling in for what looked like an extended chat. But before she did, she maneuvered her fork under one of Stephen’s perfectly cooked eggs, hefted it into the air, and slid the whole thing into her mouth.

“Hello! Hello!” she said loudly. Or at least that’s what her stealthy listeners assumed she said. What they heard was “heh-roo, heh-roo” in a voice that boomed through the diminutive bakery. The door to the kitchen cracked open and the top of Diana Bennett’s head appeared.

The woman at the counter swallowed then dabbed at her chin.

“Yeah, yeah, we left in a snowstorm. Can you believe it? A snowstorm…in April. It was only a few inches but it was like the first storm of the season, coming at the windshield in a swirl, like you’re in a tunnel. I hate that.

“No, no, there was no one clearing the road so I couldn’t see the lines on the road. And it’s so dark up there. You’d think they’d spring for some street lights what with the condo fees they charge. I got home okay but I wasn’t pleased, I can tell you that.

“When I got in the house, I just looked at my husband. ‘What,’ he says.

“So I said, ‘How come you didn’t call me to see where I was? I just drove home in a snowstorm.’ I coulda been dead on the side of the road and he would never know. Men!

“Anyway, that’s over. But we supposed to get more of this crap on Friday and Saturday. I’m telling you, I’m so done with this stuff. Enough, already.”

As she paused to inhale one of her pieces of buttered toast, Diana inched out of the kitchen, wiping her hands on a towel. Stephen gave up any pretense of cooking.

“What do you mean where am I?” the woman of mature size continued. “I’m in that little podunk town in Vermont that my husband likes so much. To ski.”

She now had the attention of everyone in the bakery.

“I keep telling him I wanna ditch this second home stuff but you know how he is about skiing.” The woman paused to fork up a sausage. “What do you mean you don’t know where our second home is. You were just there on Thanksgiving.”

A longer pause ensued while the woman listened intently, her second egg congealing on her plate, her toast growing cold.

“What do you mean who is this? It’s Yvonne. You know, Yvonne.”

Another, even longer, pause ensued as the woman pressed the phone to her ear with great force.

“Well, who the hell are you then?” she finally yelled before slamming the phone on the bakery’s counter.

At that moment, she became aware of the silence clogging the bakery’s arteries. She turned to glare at her audience but at that very moment, heads moved in different direction and several conversations buzzed into the air at once. Diana whisked herself away, back to the sanctity of her kitchen. Stephen began to cook again. Hilary poured coffee.

The woman burped as she rose from her place at the counter. “I want my check. I’m in a hurry.”

Stephen moved as fast as he could, struggling to keep his face expressionless.

But as soon as the bakery door closed, he turned toward the now very-attentive diners and raised his spatula.

“Repeat after me,” he said.

And they all obliged: “It takes all kinds.”

Remember, you can visit Carding any time by scouring the archive of older stories or by reading one of my four Carding novels, The Road Unsalted, Thieves of Fire, The Dazzling Uncertainty of Life, or Lights in Water, Dancing.