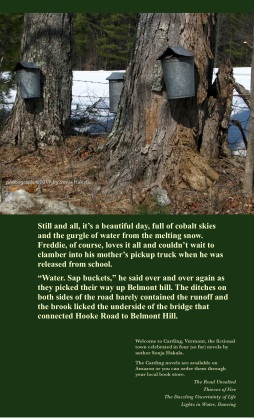 The Vernal Equinox arrived yesterday at 5:58 p.m. That’s the exact moment when the sun’s rays hit the equator full on and those of us who live “up heyah” enter the warm time of year.

Officially, that is. Here in Vermont, there’s still a lot of lingering winter to get through.

And nothing reminds Vermonters of this lingering more than what we call Mud Season. It’s usually heralded by signs put up on the roads by the local crews proclaiming many of our byways off-limits to anything heavier than 25,000 pounds. That’s so the asphalt roads won’t collapse into bigger potholes.

And there’s the tire-sucking mud on our dirt roads. I guess it’s all test to see if we really want spring to come.

But most especially mud.

In smallish towns like Carding, Vermont, there are certain people who seem to capture everyone’s attention. There are eccentrics such as Amos Handy with his ubiquitous Bermuda shorts and wild Hawaiian shirts, worn in all but the very coldest weather. There are folks such as Diana and Stephen Bennett who own the Crow Town Bakery, Andy Cooper over at the general store, postmaster Ted Owens, and Stan the town-truck man who have earned renown from their well-run businesses. And there’s Edie Wolfe who is remembered by older folks as the daughter of Senator Danielson Wolfe and by younger folks as the executive director of the Carding Academy of Traditional Arts.

But these are all adults, people who have had time to etch their personas into the town’s collective unconscious. It’s unusual for that to be the case with a child.

But then I’ll bet you’ve never met five-year old Alfred Tennyson or, as everyone calls him, “Little Freddie.”

His parents, Lee and Christina Tennyson, certainly never have. “I sometimes wonder if he was sent here from an alien culture to observe us,” Lee once muttered to his wife.

“I still wouldn’t change any part of him,” she whispered back.

“That’s for sure. Life wouldn’t be half so fun.”

To start with, there’s Little Freddie’s physique. In general, the Tennysons are considered a rather sylphlike family. The men are lean and the women graceful. On Christina’s side (she was born a Ballard) of the genetic equation, the women are curvy. In fact, Lee has been caught making eyes at his own wife on more than one occasion, as if he is still trying to commit all her peaks and valleys to memory.

Little Freddie, on the other hand, is built like a football tackle. There’s not an extra ounce of fat anywhere on the child. It’s just that you’d never mistake him for a gazelle.

But that’s not what gets folks to smiling whenever he’s around. You see, Freddie is a boy full of glee. Everything delights him—milkweed fluff, kittens, icicles, falling leaves, Houdini the Tennysons’ obstreperous goat, blueberry muffins, books from the library, sleeping, waking—it all makes Freddie squeal with joy.

On one hand, his energy sparks up every corner of the Tennyson household. On the other hand, his parents are often exhausted and sometimes they worry that Freddie’s many loves will make it hard for him to focus long enough to learn how to read or count or master the skills he may need in the future.

His pre-school teacher has been ringing that alarm bell for a while now. “All he wants to do is play in the sandbox,” she said. “He needs to learn how to focus.”

But Lee and Christina aren’t willing to put their son in a box. It will all come together when Freddie’s ready, they tell one another.

Now today is the first full day of spring, a time that’s marketed with pictures of daffodils and nesting birds. But while flowers and feathered creatures may be happening in some places, here in Vermont, spring is announced by the “scree” of  returning redwing blackbirds and the tire-sucking mud of thawing dirt roads.

Still and all, today is a beautiful day, full of cobalt skies and the gurgle of water from the melting snow. Freddie, of course, loves it all and couldn’t wait to clamber into his mother’s pickup truck when he was released from school.

“Water. Sap buckets,” he said over and over again as they picked their way up Belmont hill. The ditches on both sides of the road barely contained the runoff and the brook licked the underside of the bridge that connected Hooke Road to Belmont Hill.

He stretched himself as tall as possible in his seat when his mother geared down to tackle the slope of their driveway, praying she’d make it to their back door without getting cross-threaded in the the ruts that reappeared every mud season. Freddie loved the challenge but Christina not so much if the tight grip she has on the truck’s steering wheel is any indication.

With a deep breath, she started to trundle up the hill, the steering wheel jerking in her hands every so often. She skirted one soft and muddy spot only to hit a pothole hidden in the bottom of a puddle and so on and so on. Finally, with a judder of the truck’s front end, she pulled into the barn attached to the Tennyson home. With a deep sigh, she set the brake and leaned over to undo Freddie’s seat belt.

But the little guy was already out of his harness and marching across the barnyard to stand at the top of the driveway.

“Mom, what makes all the holes and mud so bad?” he asked.

Christina waved her arms in a circle. “It’s been really cold for a very long time,” she said, “but now all of the snow and ice is melting. You know how the ground gets hard around Thanksgiving time when it freezes?”

“It wrinkles when it does that,” Freddie said.

“Yes, wrinkles,” Christina agreed. “Well, all that cold is coming out of the ground now but only a little at a time.” She grabbed a stick from the edge of the yard and jabbed it into the soil. It didn’t sink in more than an inch. “See, only the top is soft while everything underneath is still frozen so when the snow melts, it can’t soak into the ground. But the water’s got to go somewhere so it runs down the road.” They took a few careful steps to the top of the driveway. “As it travels down hill, it takes some of the dirt with it. Eventually, you get holes and when we drive over the road, our tires sink into some places but not into others so we get ruts.”

“And lotsa mud,” Freddie said in a very serious tone.

“Yes, lots of mud. Come on, I’ll make you a snack,” Christina started to say but Freddie was already marching toward the back of the barn.

“Not hungry Mom,” he called over his shoulder.

Christina’s face crinkled up in a question mark. Freddie was always hungry. “Okay, if you say so,” she said doubtfully.

Freddie was outside all afternoon. Every so often, Christina spotted him leaving the barn with a shovel or trowel in tow. She could see the full length of the Tennysons’ infamous driveway from the living room, and she checked on him often from there. Once she walked out to stand at the top of the road to remind her son to “keep an ear out for your father’s truck so you can get out of the way.”

Freddie nodded “yeah, yeah” but never looked up from his labors in the mud.

I sure hope he isn’t making the road worse, she said to herself as she walked toward the chicken coop to check for eggs. Though I’m not sure how it could get much worse.

It was twilight before Christina spotted the headlights of her husband’s truck. He’d been thinning a wood lot of dead trees and had picked up their older son, Scott, on his way home. She rushed outside to make sure Freddie was out of the way only to find him standing at the top of the driveway, tools abandoned in the snow off to one side, his arms crossed firmly over his chest, his eyes fixed on the truck coming up the hill.

Christina turned to watch with him, and noticed that Lee’s headlights weren’t zigging and zagging to avoid the potholes and washboard areas. She glanced down at Freddie. His face was rapt and instead of his usual freeform gaiety, he looked serious.

“Did you hire someone to work on the driveway?” Lee asked as he stepped out of his truck.

“No.” Christina looked down at Freddie. “That was your son’s doing. He’s been out here all afternoon.”

“Really?” Lee turned to look down the hill but it was too dark to make out any features. “What did you do, Freddie?”

“Fixed it,” he said, extending a pair of muddy gloves as evidence.

“How did you learn to do that?” Lee asked.

“Sandbox,” Freddie said. Then he started toward the house and the beckoning lights of the kitchen. “I’m hungry, Mom. Can we have cookies and ice cream for supper?”

Remember, you can visit Carding any time by scouring the archive of older stories or by reading one of my four Carding novels, The Road Unsalted, Thieves of Fire, The Dazzling Uncertainty of Life, or Lights in Water, Dancing.