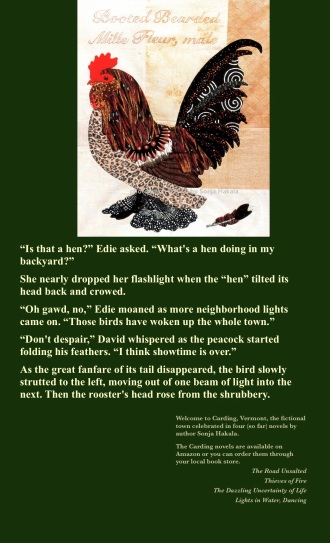 There’s a distinct chill in the air of Carding, Vermont now that the calendar has moved into November. The evenings are definitely longer now, the clouds often thicker during the day.

In short, quiet reigns all over town once the sun sets.

So any disturbance is sure to get attention, especially when it occurs in your own backyard.

Welcome to Carding, Vermont where life always includes a dash of the unexpected. Carding is the small town (population 3,700 or so) that no one can seem to find on a map of the Green Mountain State. But you can find it any time, right here in the Carding Chronicles and in the four novels of Carding, Vermont.

Details about the novels are at the end of this story. And may I encourage you to subscribe to my website so you won’t miss out on anything Carding.

This three-part tale begins with a scream coming from Edie Wolfe’s backyard…in the middle of the night.

Glad you’ve stopped by for a visit.

When the scream pierced the quiet of the night, Edie Wolfe almost levitated out of bed. Her cocker spaniel, Nearly, leaped into his high-frenzy mode, reserved for only special occasions such as screams from his backyard in the depths of a November night.

“What the…?” Edie muttered as a second scream split the dark. “That’s not human.”

Luckily, Edie had left her favorite fall-chore jacket on a chair in the kitchen, the one she used for dirt-inducing chores such as stacking wood and cleaning up the garden. She jammed her arms into its sleeves as she flipped on lights. She was relieved to note that her closest neighbors’ lights had come on too.

“Did you hear that?” David Tarkiainen’s voice swept over the fence between their houses. David, Edie noticed, preferred his bathrobes in plaid flannel.

“Sure did,” Edie said as Nearly whipped out the back door into the yard, sounding for all the world like a big dog. A deeper woof heralded the arrival of the Tarkiainen’s black Lab, Curtis.

“Stay!” both owners yelled at the same time.

The scream sounded again, and the beams of Edie’s and David’s flashlights converged on the same spot.

“That sounds like a peacock,” David’s wife Lillian said as she joined the party.

“Yeah. When I was in high school, we took a class trip to Wales to visit castles and attend the National Eisteddfod. There were peacocks on the grounds of some of the castles we visited. The males scream like that when they’re going to display their tail feathers,” Lillian explained. “It’s a spooky sound.”

“Oooh, the Eisteddfod? Isn’t that the big storytelling event in Cardiff?” Edie said. “I’ve always wanted to go to that.”

Edie and David panned their flashlight beams slowly across their two yards. Even the dogs were quiet with anticipation.

“Oh, there he is,” Edie said as her light caught a glint of iridescent blue feathers.

David’s light caught up with hers and together, they created a halo around a magnificent bird in full display. They watched in riveted silence, speechless, as the bird turned slowly in place so they could get a full view—back, sides, and front.

“Now why would he go to all this trouble in the dark?” David mused.

“He wouldn’t unless there was a female somewhere close by,” Lillian said. “Stay here. I’m going to get another flashlight.”

When Lillian returned, the three neighbors stepped cautiously onto the frosted grass of their backyards, the rimed blades crunching softly under their feet. David and Edie kept their lights steady as the peacock fluffed and waggled its tail while Lillian played her light among the bare trees and shrubs.

She nearly dropped her flashlight when the “hen” tilted its head back and crowed.

“Oh gawd, no,” Edie moaned as more neighborhood lights came on. “Those birds have woken up the whole town.”

“Don’t despair,” David whispered as the peacock started folding his feathers. “I think showtime is over,” As the great fanfare of its tail disappeared, the bird slowly strutted to the left, moving out of one beam of light into the next. Then the rooster’s head rose from the shrubbery.

David clapped a hand over his mouth but his wife and Edie both heard him chuckling. “Oh, you know this story will be all over town before lunch.”

His two companions paused to relish the telling and retelling that was to come.

“So where did this bird come from?” Edie asked. “I don’t know anyone who owns peacocks in Carding, do you?”

The three neighbors blinked at one another, flummoxed for the moment. Then Lillian snapped her fingers. “Edie, didn’t you tell me that the Tennyson twins are back in town?”

“Yes, there’s supposed to be a family get-together over Thanksgiving weekend,” Edie said.

“That could be interesting,” David said.

“More interesting than usual, according to Lee Tennyson. I gather there’s going to be a discussion about selling the big house here on the green because the twins aren’t keeping it up, and the rest of the family would like to put it on the market before it costs too much to revive it.”

They turned to look down the road toward the once-vibrant Victorian on the far corner. Folks had been muttering about its peeling paint and neglected yard for some time now.

“It has grown shabby,” David said.

“And when you compare it to the other houses on the Green,” Lillian added, “it’s definitely losing value.”

Contented bird sounds filled the backyard, and the three neighbors were suddenly aware of how cold they had become.

“Do either of you know what time it is?” Edie asked, trying in vain to suppress a shiver.

David yawned. “Well, I might as well put the coffee on and get some paperwork done before work.” He was Carding’s new superintendent of schools. “What should we do about the birds? Just let them find their way back home?”

Edie turned off her flashlight, and headed toward her back door. “I’ve never raised chickens but I understand that neither hens nor roosters are all that bright. I think I’m going to put a notice out on the town email system to see who may be short a couple of birds.”

With a wave, the neighbors ventured back inside to stoke their wood stoves.

As she brewed her first cup of tea for the day, Edie poked at her laptop, composing a “lost and found” for the peacock. But halfway through, she thought better of it. After a glance at her clock, she dialed the number for the Tennyson farm to talk to Lee or his wife Christine. Edie had known Lee’s aunts, Flora Mae and Mary Beth, since they were all in high school together. Even back then, their eccentricity—and contrariness—were a legend.

That meant that any discussion about selling the Tennyson house on the Green was sure to be crotchety, disagreeable, and downright testy.

The sisters had always treated the old Victorian home as theirs in spite of the tangled deeds and wills that governed its true ownership. The rest of the extended Tennyson family had, from time to time, pointed out that the rambling structure was not owned by any single Tennyson or any team of Tennysons. It was truly “a family manse.” But their objections always died quiet deaths in the face of the twins’ fierce defense of their “rights.”

But Flora Mae and Mary Beth had never stayed in Carding long enough to truly care for the house and now it was suffering.

Lee Tennyson picked up on the second ring. “Hello, Tennyson Farm.” His voice was crisp, and Edie wondered how long he’d been up.

“Lee, hi, it’s Edie Wolfe. Are you missing a peacock by any chance?”

There was a long silence on the other end of the line, and then Lee sighed. “My aunts…never mind. I’ll come over and get it. You don’t, by any chance, also have a rooster in your yard?”

“I do, as a matter of fact.” She heard a voice in the background, and then Lee’s wife, Christine, came on the line.

“Edie, I’ll be down as soon as I drop the boys off at school to pick up the birds. Would you have time for tea when I get there? We could use some advice.”