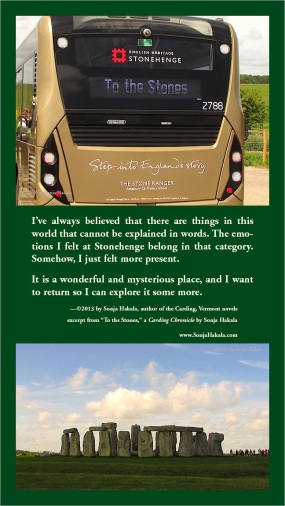 Every year, Edie Wolfe takes a vacation with her younger sister, Rosamund. Most of the time, they rent a cottage on one of the Champlain Islands in Vermont or travel up to Montreal, Quebec.

But this year is different because the two sisters decided to treat themselves to a long vacation in England. They’ve been talking about doing this for years.

Of course, Edie is writing emails home and sending pictures to her family and friends.

I thought you would enjoy reading them too.

Carding is a fictional town in Vermont that’s celebrated in four novels (so far). The fourth novel—Lights in Water, Dancing—is now available for your reading pleasure. You can order it from your local independent book store or from Amazon.com. There are links to all of the books at the end of this story.

This week, Edie and Rosie are enjoying themselves in the city of Shakespeare, on the plains of Salisbury, and among the incredible gardens of Kew.

As my sister keeps reminding me, we are now in the home stretch of our vacation, and our world has been on fast-forward for several days now.

Since I wrote to you last, we’ve traveled back to the 15th century in William Shakespeare’s hometown, Stratford-Upon-Avon, then we traveled back-back-back to the Neolithic era at Stonehenge, and then whipsawed right up to the present day in the utterly magnificent gardens at Kew for our final days in London.

I can promise you I will sleep all the way home on the plane when we leave tomorrow.

Though I’m not sure I want to leave.

We had a moment of surreal-ness when we first stepped off the train in Stratford-upon-Avon. You expect to walk right from the terminal into Tudor England with all of those buildings constructed of dark brown wood in curving geometric designs overlaid on a white plaster.

Instead of Tudor, we found ourselves in the midst of a modern construction zone of brick apartments (or are they flats—I’m never sure of the correct term and there seems to be some confusion about it) rising three stories above the ground.

There was all the roar you expect in such a place, and we felt momentarily lost. (A frequent though enjoyable feeling since we’ve been here.) But with a bit of wandering and some appropriate signage, we soon discovered Bard Land.

I am making a bit of fun but please don’t get the impression that England’s celebration of the greatest writer in the English language has gone all Disney. Quite the opposite. Sure there are souvenir shops and the clot of restaurants in town speak to a place that’s living off of tourist trade. But I have a hunch that only the names have changed in this place since William was a lad.

Stratford-upon-Avon has always been a thriving village.

That’s what I love about the places we’ve been in Great Britain. The sense of history runs bone-deep here. As a people and a culture, the English are far more comfortable in their own skins and heritage than Americans ever are. They don’t need neon lights because they’ve got the real thing.

The Shakespeare Center is a mid-sized museum grafted onto the home where William was born and raised. The exhibits were more a measure of this extraordinary man’s impact on cultures around the world than about his life.

Now I enjoy Shakespeare but my everyday tastes run more to Jane Austen and George Eliot and Charles Dickens and J.R.R. Tolkien so I wasn’t prepared for my reaction when I entered Shakespeare’s home.

I actually teared up at the thought that I was walking on the same boards where he walked (ran) as a child. It took me back a bit.

So what did I learn? That the house was nearly torn down in the middle of the 19th century but was saved from destruction through the efforts of Charles Dickens and a lot of cohorts who raised the money to save it “for the nation.”

That people in the 15th century slept sitting up because of a belief that the devil could enter your body through your open mouth if you laid down. (It’s why so many of the beds from that time period are so short.) That writers on pilgrimage used to etch their names in the window glass of William’s home until the panes were rescued by the museum’s curators. That the heavily decorated wallpaper in the house is not adhered to the walls but hangs a few inches from them. This method traps air between the wallpaper and the outer wall, functioning as a type of insulation against the cold.

And here’s the reason why Shakespeare left his wife, Anne Hathaway, his “second-best bed.” It seems that families of substance (and William was a good businessman so his family had substance) always had two beds. One was used in the parlor or drawing room as a place for family or guests to sit or perhaps loll after a heavy meal. It was more of a nap site than a place to spend the night.

Comfortable sleeping was the function of the “second-best bed,” the one that William left for Anne.

By the way, we had lunch in a 15th century building with a thatched roof. It was so cool.

Our next jaunt was on the top of my sister’s list of places to see—Stonehenge. You know her interest in the prehistoric. So off we went on another train ride that ended in a bus that ended in another bus. I do wish we had this type of transportation at home. You get to see so much more on the way from here to there.

Of all the places we’ve visited, I can’t remember any that are as protected as this ancient stone circle. I don’t mean that there were security guards everywhere, far from it. But that the land around this precious place is lightly used. That was evident from the way that buildings fell away to fields full of bright yellow canola (called rapeseed over here) as we approached the henge.

The museum—which uses video and artifacts to bring the site to life—is quite a ways away from the actual henge. (A henge is a circle of stones or wooden posts that surround a flat area. In the case of Stonehenge, there’s a ditch dug around a flat center. The stones that we all know were raised on the flat interior.)

From the museum, a shuttle bus took us to the actual site.

Rosie was so excited. She was like a little kid on Christmas morning. I think she had her moment of tearing up when we first spotted the stones. I heard her gasp.

You know when you’re in church how people speak in hushed tones? The atmosphere at Stonehenge is like that. Even the young children caught the respectful vibe.

I’ve always believed that there are things in this world that cannot be explained in words. The emotions I felt at Stonehenge belong in that category. Somehow, I just felt more present.

It is a wonderful and mysterious place, and I want to return with Rosie so we can explore it some more.

Our final two jaunts took us back to London. The first one was to Kew Gardens, just outside London. A couple of train connections let us off in a shady square that’s the center of the village. A short walk later and Rosie and I were in the most important garden in the world.

Not only is Kew a marvel of design—rock gardens, paths that intentionally wander through dells planted with more varieties of rhododendron than I imagined possible, treescapes with species hitherto unknown to us, greenhouses, statuary, an alpine house, a waterlily house, desert plantings—it is the largest repository of plant species in the world.

For example, back when we were at the Eden Project, some of the plants we saw came from stock or seeds preserved by the botanists at Kew. They have re-populated islands overrun by rats (introduced by European ships pulling into port) with plants that had gone extinct in their native habitats.

We felt like Alice after she fell down the rabbit hole because everywhere we turned, there was a plant we had never seen or heard of before (handkerchief trees and weeping beech, for example).

I want to bring all my gardening friends here for a week so we can go to Kew every day.

Our final trip was to the bank of the Thames to catch a backstage tour of Shakespeare’s Globe Theatre.

Now the original Globe Theatre was built and burned more than once. Just about everything in London can make that dubious brag. The place we visited is a replica that’s a few hundred yards away from the site of the original.

It has an interesting back story. It seems that the American actor and director Sam Wanamaker emigrated to the U.K. when Joseph McCarthy was wreaking havoc in the U.S. (We do seem to have these periodic flirtations with right-wing nuttery, don’t we?)

Wanamaker was a very liberal man and feared being blacklisted. That’s why he moved.

When he got to London, Wanamaker went looking for the Globe, figuring it had been preserved. But all he found was a dirty plaque tacked to the wall of a brewery.

Well, that just wouldn’t do.

So in 1970, Wanamaker decided to build this temple to Shakespeare. He rounded up supporters, raised millions of pounds over the course of 23 years, commissioned a ton of research on the original, and created as authentic a Tudor theatrical experience as you could ever want. It opened in 1997, four years after Wanamaker died.

But he did get to see the foundation of the building, his dream, rise from the ground.

I am going to close for now, dear ones, because the buzzer on the dryer in the place where we’re staying just went off so my clothes are clean again, and I need to pack. We fly out tomorrow afternoon.

Looking forward to seeing all of you again!