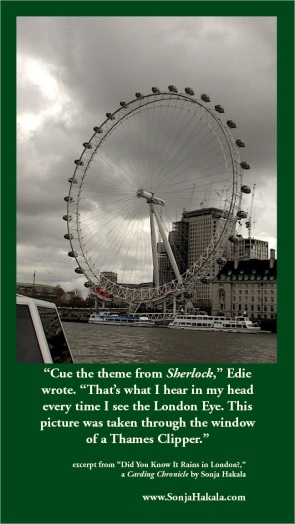 Every year, Edie Wolfe takes a vacation with her younger sister, Rosamund. Most of the time, they rent a cottage on one of the Champlain Islands or travel up to Montreal, Quebec.

But this year, they decided to treat themselves to a long vacation in England. They’ve been talking about doing this for years.

Of course, Edie is writing emails home and sending pictures to her family and friends.

I thought you would enjoy reading them too.

Carding is a fictional town in Vermont that’s celebrated in four novels (so far). You can find links to them all after Edie’s description of her travels in England.

Rosie and I are at the end of our first week in England and I have to tell you that the word “whirlwind” has taken on a new meaning for us. As you can imagine, every turn we take in London reveals something more fascinating than the turn before and we’ve been neck-deep in history ever since we landed at Gatwick Airport.

Our AirBnB hosts, Leigh and Mary Parker, could not be nicer, pointing us in the right direction while explaining the inexplicable. In spite of that, we’ve still managed to get turned around more than once but we quickly discovered that if you stand still and look woebegone, someone will stop to ask: “Are you lost? Can I help you?”

First things first, of course, so we were out buying umbrellas and Oyster Cards right away. Oyster Cards function like gift cards, and are used on the trains, the tube, the buses, and the ferries (known as Thames Clippers) that carry people all over London. There’s a rumor that the umbrellas will keep you somewhat dry while you’re doing that.

Rosie and I have become particularly fond of the Thames Clipper service. We’re staying not too far from Greenwich (with its Royal Observatory and a HUGE park and the Cutty Sark and a great street market) and there we can board the ferries that take us through the heart of London without traffic or crowds. It’s a great way to sightsee.

So let’s get to some of our pictures!

Cue the theme from Sherlock. That’s what I hear in my head every time I see the London Eye. This picture (above) was taken through the window of a Thames Clipper. It’s the best way to see the whole thing. And yes, it turns so slowly you have to watch carefully to see it move.

During our research for this trip, we found lots of recommendations for Borough Market so we wandered around until we found it.

Borough is built, literally, under London Bridge, spilling out onto some of the adjoining streets. Vendors have been selling their wares here for a thousand years and the place is packed with buyers for the incredible cheese (see below), produce, fish, breads, coffee, spices, and eatables of all sorts.

Borough Market is located in the section of London known as Southwark (pronounced suth-ick). Like many places in England, Southwark centers around a cathedral of the same name. This is the part of London where William Shakespeare hung out and the replica of his Globe Theatre and the Tate Mordern Museum are just a short walk from the church. Along the way, we found this street performer playing “Singin’ in the Rain” on a tuba that spouted flames.

As you stroll through the city streets, you can brush medieval walls with your fingertips and find clots of Roman stonework here and there.

I am getting such a kick out of this.

Next day, we rode the Clipper once again, this time further up the Thames to Westminster pier where we planned to visit the abbey of the same name.

Rosie and I decided to take the long way ’round to squeeze our way through Covent Garden where we caught the last part of this juggler’s act (above). Yep, that’s a man balancing on a ladder while he talks and juggles and removes articles of clothing. We found out that the women in the information booth that’s on the edge of the performance area have a regular bet on what color underwear our juggling man will be wearing each day.

Seems that pink was the color of the day.

From Covent, we located Westminster Abbey queued up to get inside. While we waited, I spotted this sign for Saint Margaret’s Church, a small place of worship next door.

This simple stone structure is beautiful in its lack of ostentation. But what really caught my eye was this sign explaining who some of its past parishioners were.

I know that bumper stickers like to claim that “if you can read this, thank a teacher.” But strictly speaking, that’s not correct. You should really be thanking William Caxton. Before he revved up his printing press in this area of London, English speakers were just that—speakers. Now when all communication is oral, you don’t need to concern yourself with spelling or grammar or punctuation. But as soon as you want to communicate via the printed word, the writer and the reader have to agree that the only way to spell “apple” is “a-p-p-l-e.” Otherwise, you can’t understand one another.

So Caxton, in his role as printer, started the process of regularizing our common tongue on paper.

Can you imagine setting out to do that? By the way, he’s responsible for some of the quirky spellings we still have in English such as ghost, through, rogue, and thought as well as common words such as happiness, achievement, gardening, and pottery.

Very important man, and now you know his name.

Rosie and I got separated as we wound our way through the abbey because I lingered in the Poets Corner for quite a while drinking in the names of authors whose work I have cherished my whole life like George Eliot and Jane Austen and Charles Dickens.

When I finally rejoined her outside, she pointed above our heads at one of the sculptures over the front door. “Did you know there was a statue of Martin Luther King Jr. here?” she asked.

I didn’t. The fact that the British honor King made me feel wistful. Throughout history, we have martyred our oracles and paladins, have we not? The living, breathing human being would be so preferable to the statue.

The next day, we decided to take a break from the London crowds to spend some time in Greenwich. What a splendid small city.

Our walk through the royal park ended at the Royal Observatory (below). Not only is the history of the chronometer on display (what a profoundly important development in the history of human kind), there are dozens of small and large astrolabes. I fell in love with these artifacts and their lovely curving designs and intricate engravings. There’s something rather wizard-like to them.

Then we wandered down the hill, watching the London skyline grow ever larger on the horizon, until we reached the National Maritime Museum. Of all its displays, it was the wide variety of figureheads that I enjoyed most. (below) Then it was into Greenwich town proper.

Rosie and I have a habit of wandering down narrow streets because there’s always something interesting to find along the way. This picture (below) was in the window of an art gallery that we passed on the way to Greenwich market where I bought my first souvenir, a small dragon fashioned out of copper wire.

Of course, this is just a wee squidge of what we did all week. I have to say, I am so enjoying the British people. They are helpful and smart and witty. I don’t think we’ve had a conversation yet when we didn’t end up laughing.

…we’re off to Falmouth in Cornwall on the train in the morning—the land of pirates and pasties (that’s pass-teas, not the things that strippers wear).