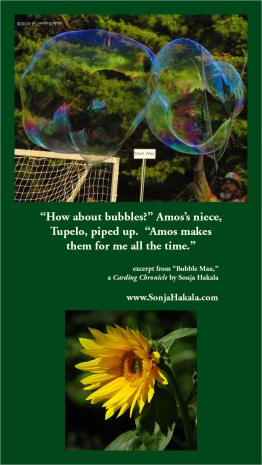 In Carding, August is the month when the whole town gets wrapped up in the annual Fair that takes over the town green for the last weekend of the month.

Welcome to summer in Carding, Vermont, the little town that cannot be found on any map. If you enjoy this story, you can find out more about the town and its people in the Novels of Carding, Vermont: The Road Unsalted, Thieves of Fire, and The Dazzling Uncertainty of Life.

The fourth in the series, Lights in Water, Dancing, will be available for your reading pleasure later this month.

If you enjoy these stories, please consider sharing the Carding Chronicles with everyone you know. Thanks.

Carding’s chief of police, Charlotte Davenport, stared at her calendar as the summer headed into the final stretch before school started. Sure, August was full of beauty—sunflowers, morning glories, the towering cumulus that heralded a heat-breaking thunderstorm, and what’s not to love about blueberries and fresh corn on the cob, right?

But the fourth weekend of August was also the date of the annual Carding Fair, the single busiest time in Chief Davenport’s little town.

“And there’s always something,” Charlotte sighed over her morning coffee. Busloads of wandering people “from away,” lost children and their frantic parents, dogs left in too-hot cars by their dumber-than-dumb owners, and traffic, traffic, traffic.

Just then, her radio squawked, splintering the quiet that Carding’s chief of police cherished at the start of a new day. “What is it, John?” Charlotte asked. John Knowlton was her latest hire for the three-person force.

“There’s been an accident at the base of the Crow’s Head Falls,” he said.

“Yeah, Charlie Cooper flipped his canoe. Twisted his ankle pretty bad. I’ve got a cold pack on it but he needs medical attention,” John said. Charlotte heard the small trill of excitement in the young man’s voice. She knew that Carding was normally a bit too quiet for the young man’s taste.

“We got him up to the town beach on one of the picnic tables.”

“I’m calling the ambulance now,” Charlotte said. Charlie’s loud protests blotted out John’s next words, making Charlotte grin. “You tell Charlie to simmer down. It’s going to hurt a lot less if we pay attention to it now.”

Of course, Carding being Carding, it didn’t take long at all for the news about Charlie’s unexpected plunge into Half Moon Lake to make the rounds. Over at Cooper’s General Store, his brother Andy was peppered with questions about Charlie’s well-being. It got so bad, he posted a sign just inside the store’s front door, reassuring folks that Charlie would live to fish another day.

But still the questions persisted.

“How bad is it?” Edie Wolfe asked as soon as she spotted Andy in the produce aisle.

“Well, he’s probably going to be fishing from shore until mid-September,” Andy said with a grin. “Let’s just say I’m glad I don’t have to live with him. You know how fanatical Charlie is about his fishing.”

“So the Fair won’t have its Balloon Man this year,” Edie shook her head. “That’s too bad. The kids will be disappointed.”

In addition to his lawyering and fishing, Charlie Cooper had maintained a lifelong fascination with magic. As a kid, he’d performed card tricks and coin drops to enthrall his friends. But his appreciation of the magic arts never ventured much beyond personal interest, and the fun of entertaining folks at parties.

In the early days of the Carding Fair, Edie once cajoled Charlie into performing his feats of legerdemain as a way to entertain the many children who accompanied their parents. But after the first year, Charlie demurred. “Card tricks are too small in scale,” he’d explained. “You need something bigger, like a juggler or a clown, for a noisy outdoor event like the Fair.”

“Got anything like that up your sleeve?” Edie asked.

“Well, when I was in college, I learned how to twist balloons.”

“You mean make animals out of balloons?” Edie asked.

“Yeah, it’s kind of fun and kids seem to love it.”

And that’s how Charles Bryant Cooper became known as “the Balloon Man” to a decade’s worth of children thronging to the Fair with their parents.

Back in Cooper’s General Store, Edie asked: “You don’t happen to know anyone else who makes critters out of balloons, do you?”

“I’m afraid I don’t know anyone else who does that kind of thing, no,” Andy said. “Charlie’s the only balloon twister I know.”

“Hmph, you do know that most balloons are made of neoprene, don’t you?” Amos Handy said as he wheeled his grocery cart up to join their conversation. The man’s aversion to everything plastic was legendary throughout town. “Neoprene’s petroleum based, and it can give off toxic gasses. Do you have any idea what happens to an animal that ingests a balloon? They’re not benign toys, you know.”

Edie’s shoulders sagged. “Oh Amos, you’re right. I should have thought of that. So now what do I do?”

“How about bubbles?” Amos’s niece, Tupelo, piped up.  “Amos makes them for me all the time.” Then she tugged on the hem of her uncle’s shorts.” Can I get some maple yogurt?”

“Sure thing,” Amos said. Then he directed a stern gaze at Edie. “Now don’t get any ideas. I just make bubbles for Tupelo once in a while. I can’t do it at the Fair. You know how I feel about crowds.”

“Can you make really big bubbles?” Edie asked. Off to one side, Andy was trying hard not to laugh because he knew that Amos would, eventually, acquiesce. Edie was difficult to resist.

“He sure can,” Tupelo said, depositing a quart of her favorite maple yogurt into her uncle’s cart. “We’ve ‘sperimented with all sorts of wands and bubble mixes. We can make small bubbles by the millions and really, really big ones too.”

Edie’s whole face brightened up. “And you don’t use any plastic?” she asked.

“Oh no. Uncle Amos hates plastic,” the child said. “We’ve got a big metal cake pan and lots of smaller pans to hold the bubble mix, and we make wands out of string and yarn and hold them up with sticks,” Tupelo said. “We make bubbles all the time that are bigger than me. Sometimes we put food coloring in the bubble mix to make them red or blue or purple or green.”

At that, Andy started to chuckle as he clapped his hand on Amos’s shoulder. “Look, I’ve been working at the Fair for years now, and it’s always a lot of fun. Give it a try, why don’t you?”

“But I don’t have any kind of patter,” Amos said. Edie sensed that the recluse’s reluctance  was fading so she pressed in.

“I don’t think that bubble-making needs a patter,” she said. “All you need to do is show up, make a few bubbles, and the kids will do the rest for you.”

Amos looked down at his niece. “I don’t know. What do you think, Lo?”

The little girl crossed her arms over her chest, serious creases in her face. “I think we should share our bubbles with the world, Uncle Amos. I really do.”

Please come back next week for the second in the series about the Carding Fair.

You can visit Carding any time in my novels, The Road Unsalted, Thieves of Fire, and The Dazzling Uncertainty of Life. The fourth in the series, Lights in Water, Dancing, will be available for your reading pleasure later this month.