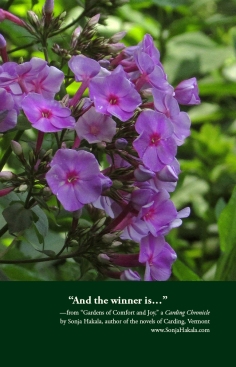 You can visit Carding any time in my novels, The Road Unsalted, Thieves of Fire, and The Dazzling Uncertainty of Life. The fourth in the series, Coming Up for Air, will be out later this year.

You can subscribe to the Carding Chronicles by clicking the subscribe button on my home page. When you do, my stories will speed from my keyboard to your inbox every Thursday without any further effort on your part.

Please share these with your friends, co-workers, and all the family members that you like best. I understand they go great with morning coffee.

Well, this is the BIG weekend for the Carding Home and Garden tour. If you’ve missed the prelude to this event, you can catch up here, here and here.

Otherwise, saddle up! The judging’s about to begin.

Jane Twitchell, Carding’s erstwhile librarian, felt a wee bit nervous as she thumbed through the entries for the best-in-show trophy for the Carding Home and Garden tour. She’d never seen so many. Who knew there were 36 such ardent gardeners in her hometown?

At first she’d sorted the entries in alphabetical order—she was a librarian, after all—but then countermanded her decision and grouped them by location. Otherwise, the four judges would be racing all over town just to catch a glimpse of the gardens never mind spend enough time to judge them.

The faithful grandfather clock in the library’s entry quietly reminded Jane that it was seven o’clock and the judges were now waiting for her in the parking lot. Don’t be so nervous, she scolded herself. It’s the library’s biggest fundraiser of the year. All the tickets are sold and the entries… She looked down at the papers in her hands again.

Thirty-six entries. Who would have thought?

This means it’s a success, right?

As she walked out to the parking lot, Jane’s hands shook a little and she was grateful not to be one of the judges.

“They’re getting their paperwork,” Ruth Goodwin whispered, “and they’re sorting themselves out with a town map. No sign of G.G. yet.” She handed her binoculars to Agnes Findley so her friend could take a turn watching from Edie Wolfe’s attic window.

“Hmmm, that’s strange. After the big fit she threw in the library last week when Jane objected to the pages she tore out of all those Fine Gardening magazines, I figured G.G. would be stalking the judges. After all, she’s been stalking us all week.” Agnes turned the binoculars over to Edie.

“You’re right. No sign of G.G. I wonder what that means,” Edie said as she examined the cars in the library parking lot.

Keys rattled in Ruth’s hands. “Let’s go see, shall we?”

Minutes later, the three friends were packed into Ruth’s Jeep and headed toward the oversized, overpriced mansion that the Dieppes owned on Mount Merino. As soon as Ruth parked at the head of the trail they’d cut through the woods to G.G.’s backyard, they pulled on their gardening boots to creep through the underbrush.

They were still a good twenty feet away when a shrill voice made them stop in their tracks.

“What do you mean I need to water them?” The pitch of G.G.’s voice hurt the ear.

“Just what I said,” a young voice replied. “You’ve got to water plants after you stick them in the ground.”

“I did, last week when I planted them,” the young man replied. “But you didn’t want to pay me to take care of them. You said you’d spent enough money on them already. It’s not my fault it hasn’t rained.”

Edie, Ruth and Agnes moved forward, being careful not to rustle the Joe Pye weed that towered over their heads. Its heavy flowers were on the verge of bursting open and the slightest touch set them waggling.

“You mean I spent $3,000 on plants and you just let them die? The judges will be here any minute. Do something!”

Ruth’s eyebrows leaped up her forehead at the mention of $3,000 spent on plants. If you added up all the money she’d ever spent on her gardens, it wouldn’t come anywhere close to that.

“You said to do something.” The young man’s face was tight with anger as he looked over his shoulder. “You’re not a gardener at all. You don’t care any more about these plants than you do about a lost golf ball so I’m doing something. I’m outta here.”

Edie dropped to her knees—no small feat for someone with arthritis—and crept forward. She just had to see. Ruth and Agnes were right behind her.

The devastation in G.G.’s yard nearly made them gasp. Ruth, the most tenderhearted gardener of the three (she had a hard time thinning carrots), almost bounded out of the underbrush in a bid to rescue the prostrate zinnias, echinacea, celosia, poppies, begonias, lobelia, hosta and nasturtiums. The fact that they were all dying of preventable thirst made her want to weep.

But Edie and Agnes pulled her back. It was time to go.

“Let’s just hope Jane remembered to do as I asked when she put those entries in order for the judges,” Edie said as they sped through the center of town. “The poor thing’s been a nervous wreck all week. She can’t get over the fact that G.G. cut up magazines that belong to the library.”

As soon as the Jeep stopped, the three women threw open all its doors. Gardening buckets full of tools were pulled from the back storage compartment, and in a flash, the three were taking last-minute snips, fluffing up the soil where it met the neatly clipped lawn, and poking their fingers into the dirt to check its moisture level.

“All right then?” Andy Cooper asked as he pulled into the parking lot.

“Where are the judges?” Ruth asked.

“Last seen headed up to Lydie Talbot’s place,” Andy said as he gazed at all the bright flowers and vegetables in the elementary school garden. “You and the kids have done a great job in here. I brought a couple of bags of mulch, just in case you need it.”

“We haven’t done much,” Edie said as she straightened up. “Just supervised a little.” And then she laughed when she saw a blinged-out scarecrow that the third-graders had set up in their corn patch.

Agnes looked at her watch. “It’s almost ten. I think we’d best get out of here”

The return trip to Edie’s house was slowed immeasurably by the home and garden lovers who’d packed the streets to see Carding’s best botanical efforts on display. Even though she’d planned to change her clothes, Edie never made it inside her house because she was whisked away to answer questions and give short tours.

At Ruth’s house, her daughter Sarah was barely holding down the fort for her mother and was glad to be relieved of the responsibility of talking about flowers. And Agnes arrived just in time to prevent her partner, Charlie, from giving out the wrong name to every plant in her gardens.

It was a long day but the sun finally crested and then slid back down the other side of the sky. With the tour part of the day over, folks crowded the town green to sop up tall glasses of lemonade and buy cookies made by the library’s trustees.

Finally, an exhausted Jane Twitchell approached the microphone set up in the town gazebo and rested her hand gently on the best-in-show trophy, a tall, hand-blown glass vase etched with the names of previous winners. A large contingent of excited students, fluttering like small birds, settled near her feet.

Agnes, Ruth and Edie finally spotted G.G. at the back of the crowd, her large straw hat askew, her cheeks ruddy with sunburn, and her eyes glaring at them.

“What’s she mad at us about?” Agnes whispered. “We didn’t forget to water her plants.”

“Do you think we could sneak up there to rescue some of them before she gets home?” Ruth asked.

“Ladies and gentleman.” Jane’s voice broke in before Edie or Agnes could answer Ruth’s question. “On behalf of the Frost Free Library of Carding, Vermont, I want to thank you all so much for coming.”

She held up an envelope. “The judges have made their decision.” She tore the envelope open. “And the winner is…”

It is said among the Carding-ites who were there that day that no one had ever heard anyone scream at the garden show before. It certainly made Jane Twitchell jump out of her skin when G.G. Dieppe let loose with her scorn for the announcement.

But they all agree that the hand-blown vase, with its mild hint of green in the glass, looked perfect in the elementary school’s trophy case.

They also agreed that they’d never seen so many different plants in Ruth Goodwin’s garden before.