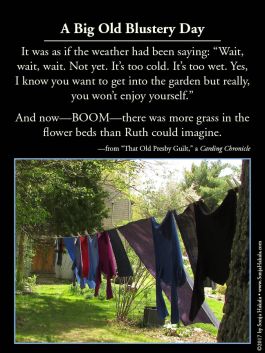 Carding Chronicles, short stories and sketches about the small (but growing) town in Vermont that no one can quite find on a map of the Green Mountain State.

Even though it may be hard to find, you can visit Carding any time in my novels, The Road Unsalted, Thieves of Fire, and The Dazzling Uncertainty of Life. The fourth in the series, Coming Up for Air, will be out later this year.

You can subscribe to the Carding Chronicles by clicking the subscribe button on my home page. When you do, my stories will speed from me to you every Thursday without any further effort on your part.

Please share these with your friends, co-workers, and all the family members that you like best. I understand they go great with morning coffee.

Ruth Goodwin thought it was a secret but everyone in Carding knew how much she loved celebrating her birthday. It wasn’t that she expected presents from everyone—”Where would I put that much stuff?” she thought—but that she felt entitled to treat herself to anything she wanted all day long.

Or at least she tried to feel that way.

You see, Ruth’s mother, Lorraine, had been a strict Presbyterian who believed that the greatest sin of all was wasting time on fun or frivolity. Even now, long after Lorraine had become a permanent resident of Carding Town Cemetery, Ruth still felt guilty if she didn’t have something productive planned for every minute of her day.

Ruth’s own daughter, Sarah, thought that “old Presby guilt” was just plain silly, and she’d tried, in vain, to convince Ruth to “to just take a nap, if that’s what you want to do on your birthday.”

But all of Sarah’s efforts were in vain until she hit upon A Very Clever Idea. “I’m taking over your birthday,” she informed Ruth a week before the big day.

“Taking over your birthday,” Sarah said. “I’ll be here first thing in the morning with coffee, muffins, and an itinerary. I’m going to fill your day with so much to do, there’ll be no room for any of that Presby stuff left over from Grandma.”

Ruth nodded and smiled but still she felt vaguely. . . guilty.

True to her word, Sarah was at her Mom’s house pretty close to the crack of dawn—the Goodwin family is an early-rising tribe—toting towering cups of coffee and morning glory muffins from the Crow Town Bakery.

As soon as the last morning glory crumb disappeared, Sarah herded her mother into the car. “Where are we going?” Ruth asked.

Sarah smiled as she turned up Belmont Hill. “When was the last time you hiked your favorite part of the Appalachian Trail?”

“But I didn’t bring my hiking shoes,” Ruth protested.

“They’re in the back seat, along with your walking stick, camera, and water bottle.” Sarah grinned. “No excuses, Mom. Today is all about everything you like to do.”

As soon as Sarah braked into the pull-off by the trailhead, Ruth heard the familiar strains of “Happy Birthday,” a little off-key because Andy Cooper couldn’t carry a tune to save his soul. And then Edie Wolfe opened the car door, Agnes Findley helped Ruth out, and before the guilty birthday girl could think about it, the four friends set off through the sparkling woods on a perfect May morning while Sarah drove herself to work thinking “Mission Accomplished.”

Ruth laughed as her feet swept dew from the familiar trail. A robin treated the group to an early morning ode to nest-building and plentiful seeds. They all remarked on the height of the ostrich ferns, the sprinklings of violets at their feet, the nodding heads of early coltsfoot already gone to seed.

The walk ended, as it always did for them, at a great round rock that thrust its chin over the rush of one of the many seasonal brooks that appeared alongside the trail each spring. Andy pulled two bottles of champagne from his knapsack. Edie added a carafe of orange juice and plastic cups while Agnes produced a small chocolate cake, pre-sliced and carefully wrapped.

“I’m not sure how agitated this will be after our hike,” Andy said as he aimed a bottle’s cork over the water. “Better have those cups ready.”

The champagne’s loud POP was followed by a lively froth, most of it caught in the drinking vessels. As they dug into the cake, Ruth leaned against a tree to watch some high clouds spiral above her head. “Looks like we might have some weather coming in.”

“Supposedly we’ve got some rain coming in early this evening,” Edie said. “Or at least that’s what the Dirt Road weather folks predicted.”

Just then, a stiff breeze set all the tiny maple leaves dancing at the tops of the trees. The four friends watched carefully, making their own interpretations of Vermont’s ever-changing weather. They all had stories about being caught in storms because they weren’t paying attention.

When the wind stirred a second time, the trees hissed in response. That’s when the hiking party rose as one to stuff cake wrappings and empty champagne bottles into their sacks for the walk back to their cars and the trip home.

When they dropped her off two hours earlier than scheduled on Sarah’s itinerary, Ruth promised her friends that she would “do nothing” for the rest of the day except exactly what she wanted to do. But her maternally-inspired Presby guilt just wouldn’t leave her alone.

When she looked out the window, her gardens beckoned. Ruth had been putting off the start of weeding season because of May’s cold beginning. It was as if the weather had been saying: “Wait, wait, wait. Not yet. It’s too cold. It’s too wet. Yes, I know you want to get into the garden but really, you won’t enjoy yourself.”

And now—BOOM—there was more grass in the flower beds than Ruth could imagine.

The wind blew a little harder, making the dandelions flatten themselves on the ground. “A blustery day,” Ruth sighed.

A blustery day, she thought again. Suddenly, she swept into the laundry room, filled her washing machine, and then grabbed the step stool that she used to reach her top bookshelves, the place where she kept her favorites.

Finding just the right book, Ruth hummed as she brewed a pot of tea, and wiped the winter cobwebs off her favorite lawn chair. She hummed a bit louder as she double-pinned her clothes to the line so the wind wouldn’t carry them off.

Then she positioned herself in a sheltered corner of her house, book in hand, tea at the ready. A blustery day, perfect for a close re-reading of Winnie the Pooh.

“It’s the perfect compromise,” Ruth thought. “Clothes on the line to assuage the Presby guilt, and one of my favorite books just for me.”

And then she opened the book in her lap.

It was a fine spring morning in the forest as Pooh started out. Little soft clouds played happily in a blue sky, skipping from time to time in front of the sun as if they had come to put it out, and then sliding away suddenly so that the next might have his turn.