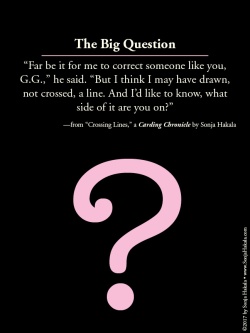 It’s cold in February, a time for hats and scarves and mittens. Faye Bennett and her best friend, Suzanna Owen, are getting some unexpected attention for their fashion choices.

Welcome to Carding, Vermont, that wonderful microcosm of events in the wider world. Please invite your friends, colleagues, and family to join us by sharing this story with them.

“So what did you get on the trig test?” Suzanna asked as she crossed Meetinghouse Road with her best friend, Faye Bennett.

Faye rolled her eyes. “Eighty—just barely. And you know I’ll have to start at the beginning and study everything all over again when it comes time to the final because that stuff slips off my brain as soon as I walk out of class. How about you? Did you skew the curve again?”

Suzanna blushed. “I don’t know about that but I did get a 91. Uncle Ted says I’ve got a head for math just like my grandfather.” She pushed the door of Cooper’s General Store open, and the pair ducked into heat and out of the cold, stomping loose snow off their boots. “I’d be happy to study with you.”

“I’d like that.” Faye stood still for a moment, letting her eyes adjust to the store’s interior. Between the brilliant blue sky and the sun’s glare off the snow, the pupils of her eyes had become nothing more than pinpricks. “Let’s go find Andy. Mom said he was saving two bags of grapefruit for her for that salad she makes.”

“The one with the carrots that don’t look anything like carrots?” Suzanna asked.

“Yeah, she roasts them in the oven with some sort of herbs,” Faye said, waving across the store to Andy Cooper. “I think they look like starfish legs by the time she’s done.”

Suzanna giggled as they headed off but then howled. “Hey, leave my hat alone.”

G.G. Dieppe stood behind her, a pink knitted hat with pointy ears dangling from her hand, her face crinkled with pinched triumph. “You will not be wearing this again any time soon. It is disrespectful.”

Faye took a deep breath, and then bellowed. “You are nothing but a thief, G.G. Give…my…friend…her…hat…back.”

The older woman’s eyebrows leaped up her forehead while the corners of her mouth headed in the opposite direction. “You need to learn to respect your elders,” she yelled, making a grab for Faye’s pink hat. But the girl ducked under her outstretched hand, and snatched Suzanna’s back.

“Hey, what’s going on here?” Andy Cooper loomed up behind Faye, bringing a small crowd with him.

“I will not shop in a store that allows this…this public display of disrespect to our new President,” G.G. cried.

“He may be your President,” someone in the crowd muttered. “He’s not mine.”

“You were meant to,” someone else said.

G.G. turned on Andy. “This is a public store. I demand that these…” she pointed at the pink hats, “not be tolerated here.”

Andy’s brother, lawyer Charlie Cooper, muscled in beside his brother. “Actually, this is a privately held business,” he said. “Andy has the right to allow or disallow anything he pleases as long as it is not obscene or a threat to anyone.”

“These…things are obscene.” The majority of red corpuscles in G.G.’s body coagulated in her cheeks.

“Now you listen to me…” But Andy held up his hand to staunch the flow of outrage. Ever since the election, G.G. had made an effort to become as unpopular as she could in Carding, and he had sensed a serious anger building up against her over the past weeks. These rifts, they were so disturbing, friend not talking to friend, family not speaking to family. He couldn’t remember anything like it, not even during Vietnam. He turned his head so that G.G. could not see, and gave an almost invisible wink to Faye.

“Why don’t you let me take those for now?” he said gently.

Faye hesitated. She’d known Andy all her life. He was a good guy and she was inclined to trust him. But she hated the feeling of backing down from G.G. Dieppe.

Then again, Andy had winked at her. She pulled her hat from her head, and placed both of them in his hands. The crowed behind him muttered. It sounded like thunder in the distance on a humid summer day, a warning of a storm to come.

“And now you will please finish your shopping and leave the store,” he said to G.G. with a glance over his shoulder. “I can account for my own actions but I will not be held to account for the actions of others.”

The woman’s face puckered up but then she took a look at the crowd now encircling the little drama, and thought better of it. She swept them all with an icicle stare, and then marched to the nearest cashier.

“I’ll be back in here tomorrow,” she yelled.

Andy smiled and nodded. “I’m counting on it.”

No one moved until G.G. counted her change and huffed out the door. Then Faye turned to Andy. “What was all that about?”

He handed the hats back to her with a smile. “Why don’t you come back tomorrow after school to see.” Then he hit a single button on his phone and turned toward his office, talking with an urgency that belied his quiet words.

Suzanna cocked her head at Charlie Cooper. “What’s your brother up to now?” she asked.

A small smile flitted over the lawyer’s mouth. “Can’t say for sure but I plan to be here tomorrow just like you to find out.”

G.G. (she never told anyone what the initials stood for) preferred to choose the materials for her supper on a daily basis instead of shopping once a week like so many other people. The meats at Cooper’s were generally fresh, and his butcher knew what cuts of beef she preferred. The produce was not always the best but she’d learned how to rummage through the vegetables to find those most suitable for her plans, absolutely fresh for salads, less so for soups.

Besides, Cooper’s was on her way home from work, and she liked to think that her daily forays down the general store’s aisles helped her keep tabs on the people in Carding. She was not a gossip, oh no. G.G. Dieppe was not given to idle chatter. No, she was an avid observer of the human condition.

The next day, the potholed parking lot was crowded in the late afternoon. G.G. was used to positioning her gray car in one of the three spaces closest to the store’s font door. So she was rather put out to be forced to walk across the entire lot, wondering what in the world Andy had on sale that could attract so many people.

She grabbed a basket, draped it from her arm, nodded to someone with a familiar face, and then set her course for the meat counter along the back wall of the store. For some reason, she had a hankering for a bit of salmon.

The butcher cut her fish just so, wrapped it with the care she demanded, and then handed it across the counter.After G.G. nodded and turned her back, he stripped off his disposable plastic gloves to pull a pink fleece hat over his bald head. He smiled at his reflection in the glass of the meat case.

“I look good in cat’s ears,” he told himself.

Andy grinned as he watched then nodded a signal to his brother across the store. Charlie pulled a pink fleece hat out of his pocket and pulled it on his own head. The twenty people standing closest to him followed. G.G. didn’t notice because there were avocados on sale in the produce aisle, and she was busy looking for the perfect ones.

The cashiers were next. More pink hats. And then the action spread down the aisles among the customers. Edie Wolfe appeared next to Andy, her own pink hat decorated with a flower made of lace. “They look pretty good from here,” she said in a low voice.

“I can’t believe you made that many overnight,” Andy said.

Edie smiled. “Oh, I had a lot of help. As soon as I told Ruth and Agnes, the word spread all over town. I’ll bet there were twenty of us sewing late into the night.” She glanced around the store. “Have you seen Faye and Suzanna?”

Andy nodded toward the front of the store where two hatless girls were just walking through the door. As soon as they spotted the sea of pink hats, they stopped with an audible gasp, and G.G. looked up.

“Well, I’m glad to see…” she started to say. And then it was her turn to gasp—at the cashiers, stocking clerks, customers, and then Andy. The shopping basket fell from her hands, spilling the salmon, two tomatoes, and a box of cereal on the floor. “You have crossed the line, Andy Cooper,” she screeched. “You have really crossed the line this time.”

Thank you for journeying with me to Carding, Vermont. If you subscribe to my website, you’ll find a short story in your inbox every Thursday morning.

If you enjoy the Carding Chronicles, please share them and encourage your friends to subscribe to this website. And please review the Carding novels wherever and whenever you get the chance to talk about books. Your opinion matters more than you can imagine. The more folks who share Carding, the more books I get to write, and the more you get to read.

The Carding novels are (in order of appearance):

The Dazzling Uncertainty of Life