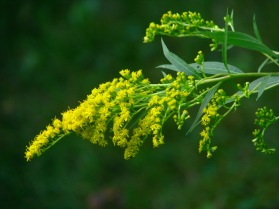 Last week in Love’s Labor: Part One, we learned that Faye Bennett’s interest in Brian Lambert, one of her brother Wil’s best friends, is reciprocated. That’s a happy circumstance for Faye and Brian.

But what’s happened to the great friendship between Faye and Suzanna Owens now that Faye finds herself in the midst of her first love?

It must be Thursday and time for another edition of the Carding Chronicles. So read on, enjoy, and then please do your part to boost tourism in Carding by sharing this story with your friends. Thanks!

Botanists estimate there are 140 species of solidago, or what we call goldenrod, in the world. Many of them have settled in New England.

This gorgeous yellow-flowered plant covers our open fields, lines our roadways and paths, and gives bees something to do right into some of the last days of fall.

In Carding, every teacher and school kid watches for the first appearance of goldenrod (the earliest varieties bloom the first week of August) because that means the period of summer dormancy is drawing to a close, and the flyers in the newspapers are screaming about “Back to School” sales. So it’s not unusual to see the energy at the town beach pick up, the number of local hikers on the Appalachian Trail grow, and the carnival rides get crowded at the local fairs.

It seems like everyone’s trying to cram as many moments at they can of summer’s freedom into the time left before heading back to school.

Ruth Goodwin, Carding’s mail carrier and woman-about-town, knows that as well as anyone. As she makes her rounds, she sees folks scrambling to finish the paint job on the garage, get wood stacked, and hustle down to the river to catch some of the bass and trout that have been fattening up since April.

So she didn’t understand why Suzanna Owens was spending a fine sunny day in the post office helping her Uncle Ted sort mail.

Suzanna, all of fifteen but looking like more like twelve, could be a skittish kid, often not responding to direct offers of kindness. Given the girl’s background—a derelict mother, an early life of random moves, sketchy schooling, and periods of abandonment—Ruth could easily understand that.

But that didn’t explain the girl’s presence in the post office.

“Hey Suzanna, nice to see ya,” Ruth ventured. Ted looked up from the pile of junk mail in his hands, relief clearly visible in his eyes.

“Yeah. Hey Ruth,” the girl sighed, and Ruth caught the sound of tears in her voice.

“Have you been waiting for me?” she asked.

“What? No.” Suzanna looked confused. “I don’t think so. Why would I do that?”

“Well, I figured you might be needing a ride up to the Tennyson farm,” Ruth said.

“Why? What’s up at the Tennyson farm?”

“They’re making plans for the corn maze,” Ruth said. “Didn’t you go to that with Faye last year?”

“Hmph, yeah, back when Faye had time for me,” Suzanna muttered. “Why would I want to go up there?”

Ruth glanced at the girl’s uncle, and Ted emphatically nodded his head. So the stories are true, Ruth thought, Faye Bennett does have a boyfriend. Aloud she said: “Well, Lee and Chris Tennyson rely on a crew from the high school to lay out the mazes, and that usually starts about now. Would you like to hitch a ride with me to check it out?”

Suzanna swiveled her eyes toward her uncle, looking for guidance.

“I used to do it for Lee’s father, back when I was in high school,” Ted said. “It was a lot of fun. We used to have different scenes set up in the maze, and one year, I played Dracula rising up from his coffin. I must have done a hundred sit-ups in one night.” He smacked his belly. “I was a lot more fit in those days.”

Suzanna dropped the pile of mail she was pretending to sort, jammed her hands into the pockets of her jeans, mumbled “Yeah, okay. I’ll go,” and scuffed her feet all the way out to Ruth’s Jeep.

As she turned to follow the girl, Ruth made the universal sign of “telephone call” to Ted while pointing in the general direction of the Tennyson farm. Ted nodded, and slid his cell phone out of his pocket.

No matter how hard Ruth tried to pry more than single word answers out of Suzanna, the girl stayed resolutely unresponsive, her eyes averted, her head bobbing in time to the dips and sways of the dirt road that led up to the Tennysons’ hundred-acre spread at the top of Belmont Hill.

About halfway to the farm, Ruth suddenly realized that her companion was grieving. Being a woman of direct action, her mouth was open before her mind was fully engaged. “Boyfriends are tough,” she said.

Ruth took a deep breath, and plunged on. “I remember when I was in high school, and my best friend got interested in boys,” she said. “I wasn’t ready yet, I realize that now, so I didn’t understand why she wanted to hang out with Jerry Hastings instead of me. I thought he was kinda dumb.”

“So you can’t hate him,” Ruth said, pulling into the Tennyson farmyard, praying that the “Maze Gang” would really be there. “That makes it harder.”

“Did you hate Jerry Hastings?”

“At first I did,” Ruth said. “I was lonely without my friend. We did everything together, and I missed her.”

The farmyard was empty, and Ruth’s heart sank. This wasn’t going well at all. But then she heard hammering and talking and laughing in the distance.

“What was her name, your friend, that is?” Suzanna asked as she opened the Jeep’s door.

“Nancy. She lives in Arkansas now.” Ruth cocked her head to listen. “Sounds like something’s going on in the barn.”

“What happened to her? Did she stay with that guy?”

“Yeah, unfortunately. He turned out to be as dumb as I thought he was. Left her with two kids and a mortgage and a junk car,” Ruth said.

Suzanna sighed as she looked around. “I wouldn’t wish that on Faye.”

Ruth reached out and squeezed her hand. “I know. Listen, I’m gonna let you in on a little secret, one that might not make any sense to you right now but I want you to remember it. Okay?”

“After I got over being mad, Nancy and I were friends again,” Ruth said. “In fact, we still talk about once a week, and we still make each other laugh. There’s nothing in the world like a good friendship between women. We understand one another in ways that guys just don’t.”

Suzanna studied the scuffed toes of her sneakers. “Do you think Faye and I are like you and Nancy?”

Ruth nodded. “Yeah. I do. Look, I’m not trying to tell you that everything’s going to go back to the way it was before Brian Lambert showed up. You and Faye are growing into women together, and that’s not the same as being girls together. You’re both going to branch out to have your own experiences, and that’s the way it should be. ”

She leaned forward to grip the girl’s shoulders. “But you’re both going to need someone to share that with, someone to help you keep your head on straight when you think you’re losing yours And that’s really important. So don’t give up on Faye, okay?”

Suddenly Faye’s brother Wil appeared in the barn door, and Suzanna’s head came up, a smile hovering in the corners of her mouth. Wil waved, and halloed, beckoning them closer. As Ruth watched, Suzanna reacted like a dry plant getting water.

Suddenly, Suzanna whirled around, and hugged the older woman. “You know, you were my first friend when I came to Carding, and I’ve never forgotten that. Thank you,” she said. And then she was gone.

Thank you for journeying with me to Carding, Vermont. If you subscribe to my website, you’ll find a short story in your inbox every Thursday morning along with food photos and recipes from the Crow Town Bakery, and other green peak moments from Vermont.

If you enjoy the Carding Chronicles, please share them and encourage your friends to subscribe to this website. And please review the Carding novels wherever and whenever you get the chance to talk about books. Your opinion matters more than you can imagine. The more folks who share Carding, the more books I get to write, and the more you get to read.

The Carding novels are (in order of appearance):

The Dazzling Uncertainty of Life