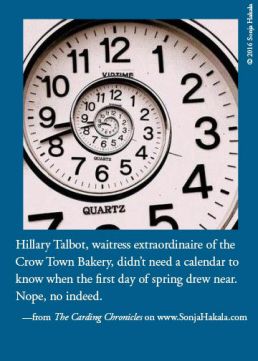 And one additional note, the next Carding novel, The Dazzling Uncertainty of Life, will debut in this space on April 7. Twelve weekly installments will be delivered right to your inbox. Tell your friends to subscribe so they can enjoy it too.

Hillary Talbot, waitress extraordinaire of the Crow Town Bakery, didn’t need a calendar to know when the first day of spring drew near. Nope, no indeed.

Suddenly, no one wanted soup.

Suddenly, the booths by the front windows filled up earlier, and stayed crowded longer.

Suddenly, the conversations over eggs and toast changed from how much wood was left in the woodpiles to talk about maple sugaring, spreading manure on the local fields, and bear sightings.

The young man smiled, and slid his cup across the table. “We were up all weekend boiling,” he told Lee Tennyson. “The sap was running that hard.”

“Oooh, any chance you’ll be making sugar on snow any time soon?” Hillary asked. Sugar on snow is made by pouring stripes of hot maple syrup over trays of packed snow. The result, if the sugar content of the sap is high enough, is a sort of taffy that’s rolled around a wooden coffee stirrer, and savored with a pickle or two to cut the intense sweetness.

“I think so,” Sam said. “We’re gonna be boiling again tonight. Why don’t you stop on by after work.”

“I’d love to bring the kids over,” Lee said. “Trevor’s been asking about sugar on snow ever since he spotted the steam coming out of your sugarhouse.”

Hillary heard Sam’s laugh, clear and strong, as she moved toward another table.

“Sure, sure,” Jane Twitchell smiled up at the young woman. Then she turned back toward her companion, Edie Wolfe. “We’re going to be doing some book weeding starting tomorrow morning. Care to join us?”

Edie nodded, and glanced at Hillary. The younger woman was renowned for her striking hair embellishments and wild socks. But the scarf twined around Hillary’s hair was rather subdued this morning, only one shade of purple, and when Edie looked down, she noticed that HIllary’s socks were only one shade of pink.

“I’ve overdue for laundry,” Hillary laughed, seeing the direction of Edie’s gaze. “These are my every-day. Nothing special.” She wandered off with her half-full pot.

The bearded man shoved his phone inside his jacket pocket then grinned at the waitress. “Yeah, but just a half cup. I gotta get going.”

“Yeah, but not the kind you’re thinking of,” Gideon said. Then he blushed a deep shade of scarlet, and Hillary raised a single eyebrow.

Gideon stood up. He had no intention of telling anyone about the sale of his house before the paperwork was signed. He’d been able to keep his purchase of two acres on Half Moon Lake under the radar, and he wanted to keep it that way to avoid uncomfortable questions from his father.

“Yeah,” he said to Hillary as he handed her a twenty. “A date like no other.”

Gideon shook his head. He’d wanted to move ever since his divorce, move into something smaller, more efficient, closer to the lake so he could fish and boat more. “No, believe me, it’s not,” he said. “You know this town, everybody here would know if I had a girlfriend before I did.”

Hillary watched him clatter out the door as she refilled her pot.

“They’re doing good,” Hillary told him. “The renovations on Mom’s house should be done later this week, and it’s none too soon because I think Amy and E.J. are at the end of their patience with her. You know how it is.”

Charlie chuckled. “I think the hardest thing for families is for two or three generations of adults to live in the same house at the same time. Somehow, when we reach a certain age, we all need a space to call our own. And if you don’t mind me saying so, your mother…”

“Would make anyone crazy,” Hillary finished the sentence for him. “Yeah, I know. She means well but somehow…well…Mom is just plain clunky when it comes to dealing with other people.”

“Who are we talking about?” Agnes Findley asked as she slid into the booth opposite her partner, Charlie.

“My Mom,” Hillary said. “And living with my sister and her husband.”

“Ah, that generational thing,” Agnes said. “I lived with my mother for the six months before she died, and it felt like six years. Even when we try so hard to be patient because someone’s sick or hurting, we still feel put-upon. I hope they’ve been able to get through your Mom’s house renovations without any hurt feelings.”

“I think so,” Hillary said, putting down a small pitcher of cream. “But just barely.”

The front door of the cafe banged open, and Ruth Goodwin flew in, her hair all awry. She made a beeline for the table where Edie Wolfe sat with the town librarian. “Okay, it’s official,” Ruth announced while Hillary poured her a cup of coffee. “This is THE worst mud season ever on the Beach Road.”

She raised the mug to her lips, and blew across the liquid, looking pointedly at Hillary. “It’s a good thing your mother isn’t living in her house this spring. I got stuck right down to my axles just beyond her house. That sinkhole’s back, and it’s deeper than ever. You’d better tell her to stay put for a while longer.”

Ruth sipped, and then dove headfirst into the conversation at her table. Hillary groaned for her sister (how was she going to break this to Amy?) as she headed back to the main coffee machine with her now-empty pot.

The bell on the bakery’s front door jingled once, twice and then three times, admitting a state police officer, Paula Bouton (Carding’s town manager), and Ted Owen, the postmaster. Amy would have to wait.

The next Carding Chronicle will be published on March 25. If you are enjoying these stories (they’re a great break from politics, eh?) please encourage your friends to subscribe.