Yep, I know that Thieves of Fire is barely out into the world (and work on the ebook files will not be complete until next week). But a writer’s gotta write. 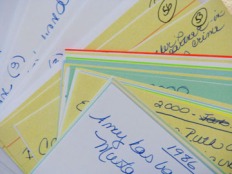 So I spent this week outlining my next Carding novel. The working title is The Dazzling Uncertainty of Life but don’t hold me to that because it could change several times between now and publication.

I’m still absorbing the lessons learned from Thieves, especially when it comes to planning before I write and how much time that can save. 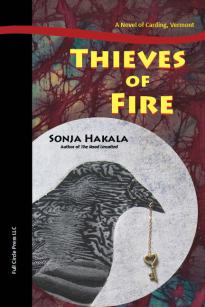 Thieves was launched at a crazy time in my life, the aftermath and recovery from the damage we sustained from Hurricane Irene. I was neck-deep in paperwork, trying to figure out how to do what we knew needed to be done, getting permits, following lines of possible funding (believe me, building retaining walls–LARGE ones–is an expensive proposition) and coordinating excavators, engineers, federal agencies, etc.

Yeah, crazy. But to give myself a little wiggle room here, I needed something that was stable in my life at that moment in time and writing has always been my rock.

Regardless of the reason why, I know that Thieves suffered from a lack of planning. Instead of starting with a story arc, like the one I had in The Road Unsalted, I started Thieves with a few pieces of knowledge about Carding, Vermont and a lot of questions.

Not the best idea if you would like to satisfy readers in a timely manner.

At one point, I was so discouraged, I almost gave up on Thieves entirely because it was so, so, so scattered. I can’t tell you how many months it sat on my desk while I scowled at it and it scowled back.

I finally decided I needed to impose order on the mess of words so I grabbed a pack of index cards, sat down with what I had written to that point, and noted each scene. This is an idea that I learned from an interview in the Paris Review with Vladimir Nobakov. (Did you know that he almost burned Lolita? His wife literally rescued the index cards for that book from a burn pile.)

Then I shuffled my cards around until the sequence of events made more sense. AND THEN I figured out where my holes were and noted the scenes that needed to be written in order to weave the book into a whole.

Then I sat down to write.

There were a lot of holes.

As I said, I learned a lot.

But the biggest lesson is this: A little planning goes a long way to saving time later.

I recently celebrated my birthday, a day that I treat somewhat like my personal New Year’s Day. I always make a resolution (OK, usually more than one). This year, it’s to up my game as far as writing output is concerned.

I have a lot of Carding stories crowding my head, a lot of characters I want to explore in much greater depth.

And readers who are asking when the next book will be out.

My goal is a new book in September. That’s THIS September.