Diana Bennett, who owns the Crow Town Bakery with her husband Stephen, loves to garden as much as her mother, Edie Wolfe. 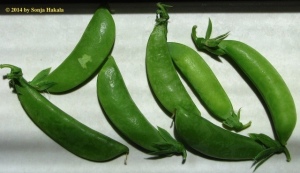 Her favorite time among the botanicals is just after sunrise, which is pretty darn early in July.

But it’s cool and the bugs are late risers.

Diana’s garden favorite this time of year is snap peas.

Somehow, they never seem to make it from the garden to Diana’s home kitchen.

In this case, Diana says that cooking is a waste.