Ten years ago, when my husband and I celebrated our 25th wedding anniversary with a Windjammer cruise, we bought navy blue hooded sweatshirts, zip front, to keep ourselves warm when on deck. 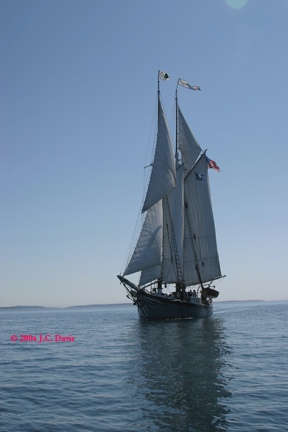 They are from the Lewis R. French (it’s the Mary Day pictured here) and they are still our favorite sweatshirts after all these years.

Every spring, right after I move my winter wardrobe out and my warm-weather clothes into my closet, we end up with about three weeks of weather cool enough to warrant wearing a sweatshirt. I always joke that I spend more time in that article of clothing than anything else I own, except maybe my winter slippers.

But then, every so often, we have a sweatshirt summer where the mornings are cool enough to warrant something comfortable and long-sleeved.

Except for a few days in June, that’s been this summer.

Loving it but it’s making me think that we really need another Windjammer cruise. They are awesome!

Started searching for a photo for the new The Road Unsalted cover among my collection of pictures and finally came across a picture I took on the last day of winter from the top of Galaxy Hill in Pomfret, one of my favorite places to walk.


Then I fooled around with other elements and finally achieved a look that makes me very happy.

The best part of these covers is that all of the photos were taken in Vermont—in Pomfret, on Holland Pond in Holland, Vermont and at Woodward Reservoir in Plymouth.

Now I can go do the other things I should be doing.

So I get the cover from yesterday all printed out on photo paper and bring it to my closest advisor, my husband Jay, for comment.

Hmm, this is not going to be good.

“I thought the title was something else.”

“Yeah, it was, but since this book is about Hurricane Irene, I thought this one fit better,” I say. “It’s based on a quote from Mark Twain.”

“Yeah, but the way you have this set up, it looks like a nonfiction book about weather, not a novel.”

“OK, I can see that. But what do you think about the background?”

So back to the drawing board.

Change the curvy structure (which is actually an enlarged and elongated tilde from the Edwardian Script font) to a different tilde. (This one’s from the Onyx font.)

Hmmm, one of them seems too skinny. How about two?

Two’s better but three would give it more oomph.

At this point, I had the curvy blue parts running across the center of the cover and I had to move them out of the way to work on the font for the title (Lithos).

And when I moved them out of the way, they ended up on the top of the cover, pretty much where you see them now.

Nudge, nudge, move, move, and then I liked it some more.

Changed the title too.

The background picture, by the way, is of reflections in the water of Woodward Reservoir over in Plymouth, VT, taken last autumn from my kayak. Looks like something Matisse would paint, don’t you think?

I’m very close to finishing the third Carding novel and have finally settled on a title: The Dazzling Uncertainty of New England Weather.

This one takes place during Hurricane Irene.


Plan to have both books finished this fall and available for readers who love Carding.

I recently met a woman at the eating table of a potluck gathering who told me she didn’t like fruit.

I went into shock.

Well, she added (probably sensing my deep sense of shock) except watermelon.

Strawberries just picked with their glowing red hearts? Pennsylvania peaches from the Lebanon Coop? Blueberries straight from the bush at Moore’s Orchard?

But it seems there are such people in the world. Yesterday, I was at a meeting at a restaurant seated next to this really nice guy who ordered a hamburger “with no pink and no green.”

“Right. And no salad, no beans, no zucchini, no spinach.”

So I ordered the biggest, greenest salad on the menu. And then when I got home, we headed up the hill to pick blueberries at Moore’s Orchard in Pomfret.

And then I felt much better.

I do believe in fairies. I do I do I do.

I drove up to Norwich last night to see author Louise Penny speak at the Congregational church. She was there as part of the Norwich Bookstore’s ongoing author events programming.

She was wonderful, and I found myself nodding in agreement as she talked about the challenges of writing.

At one point, one of the bookstore owners asked her if one of her books stood out either as particularly pleasurable or challenging.

And Penny said that her second book was the most difficult. At the same time, she described her first drafts as big, fat and sloppy because if you’re wise, you don’t edit (let the critic in) while you’re in that state. You throw in everything you want to.

Honing and shaping is what rewriting and editing are for.

So I now have a big, fat, sloppy first draft of Thieves of Fire just waiting to be sculpted.

If you get into graphic design like I do, you can fool around with your cover image all day long.

But as Taj Mahal once said as he was tuning up for a concert, sooner or later, you gotta commit.

So I’m really happy with this version of the cover for the second Carding novel, Thieves of Fire.

And while was doing it, I figured out how to put type on a curved path (you can see the results in the moon). That’s something I don’t do very often so I always have to look it up in my InDesign reference books.

In other Carding novel news, I finally settled on a title for the third book in the series, A Face to Take into the Dark. It’s based on a line I heard a character use in the final Endeavour episode in the second season of the show.

The third novel takes place during Hurricane Irene and I’m very close to the end of the first draft. More as it emerges from my pen.