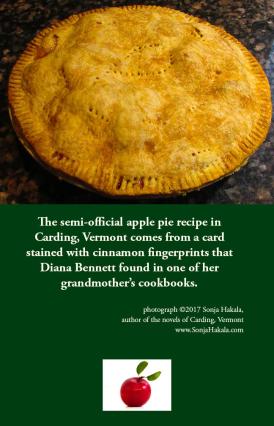 With all the excitement surrounding Pie Night at the local music school in Carding, I thought you might enjoy this apple pie recipe.

Diana Bennett, the chief baker and co-owner of the Crow Town Bakery in Carding, Vermont, found it on an index card stuck between the pages of a cookbook owned by her grandmother, Caroline Wolfe.

It’s considered a “rich” crust, very flaky and flavorful. When apples (or blueberries) are in season in Vermont, these pies appear on the breakfast menu at the bakery.

As the saying goes, “You know you’re a New Englander if you eat pie for breakfast.”

And yes, they will do nicely for Thanksgiving dessert.

7 cups of peeled apples, sliced into eighths
(Suggestion: choose apples that are all the same firmness so that they will cook at the same rate.)
1/3 cup sugar
1 teaspoon cinnamon
1/2 teaspoon nutmeg
1/2 cup tapioca

Mix all of the above together until apple slices are coated with the spice/sugar/tapioca.

Measure flour and salt into a large bowl. Add butter and using a pastry cutter, work the butter into the flour/salt mixture until the crumb of the dough resembles oatmeal.

Pour in the egg and vinegar. Using a fork, blend the liquid into the flour just long enough to moisten it. Do not overdue this step because the flakiness of the pastry depends on having little bits of butter melting while the pie bakes.

(A side note: The addition of vinegar is commonly found in older pastry recipes instead of water. It relaxes the gluten in the flour for an even flakier result.)

Divide the dough in half. Roll one of the halves out between two sheets of floured waxed paper. Carefully lift it into the pie pan, letting the outside edges of the dough drape over the outside edge of the dish.

Spoon in the fruit mixture. Using a rubber scraper, gently even the fruit out in the pan, letting it mound in the center of the dish.

Roll out the second crust. Carefully lift it onto the pie, making sure that the dough covers all of the fruit and reaches the outside edge of the pie pan.

Pick up the fork one more time and use its tines to pierce the crust a few times to let steam out as the pie cooks.

Preheat your oven to 450 degrees. Place the pie on a cookie sheet so that drips won’t adhere to the bottom of your oven.

Bake the pie for 15 minutes at 450 degrees then drop the oven temperature to 375 degrees until you see the fruit bubbling at the outside edge of the pie or through the steam holes, approximately 30 to 45 minutes.

The bubbling is how you tell the pie is thoroughly cooked.

Let it cool before slicing.